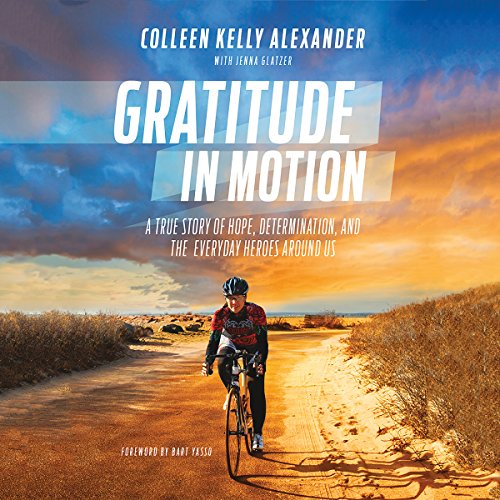 It was a beautiful fall day in Connecticut when Colleen Kelly Alexander, a lifelong athlete, rode her bike home from work. She had survived both a diagnosis of lupus and brain surgery, had a fulfilling career, and was married at last to the love of her life. Everything was good as she coasted along, meeting the eyes of a truck driver as he approached the stop sign beside her.

He didn't stop. The truck hit Colleen, running over her lower body with front and back tires and dragging her across the pavement. As she bled out in the street, nearby strangers surrounded her and the driver attempted to get away. An EMT herself, Colleen knew she had to stay awake. "I've just been reconnected with my soulmate", she told the medic. "We want to have a baby. I can't die now. Please don't let me die."

Five weeks in a coma and 29 surgeries later, Colleen survived. Rather than let the trauma and PTSD control her life, she became determined to find a way to make something positive from her pain. She decided she'd run again and dedicate her race medals to the everyday heroes around us, including the medical staff and blood donors who saved her life. Since then Colleen has run 50 races and completed 40 triathlons, including four half-Ironman events. Now a spokesperson for the Red Cross, Colleen shares her incredible inspirational story to encourage others to take that first step forward.

What listeners say about Gratitude in Motion

Colleen, thank you so much for sharing your story. I laughed, I cried and everything between. You are special and amazing. Your story and outlook on life is good for the soul. I listened and found hope during my own post surgery recovery. This is a must listen/read!

Very inspirational and proof that God heals and has a purpose for our lives. Amazing story of transformation and strength.

Wonderful story of hope and positivity

Absolutely awe inspiring story read by the author which enhances the experience tremendously.
The example set by Colleen and all of the heroes mentioned should help to give inspiration and motivation to anyone facing challenges.

Colleen’s courage and determination is truly inspirational. Her “do great things” in life attitude and selfless actions are a beacon of light. So pleased to have chosen this book.
Beautifully narrated too.
Constantly thinking about this story.