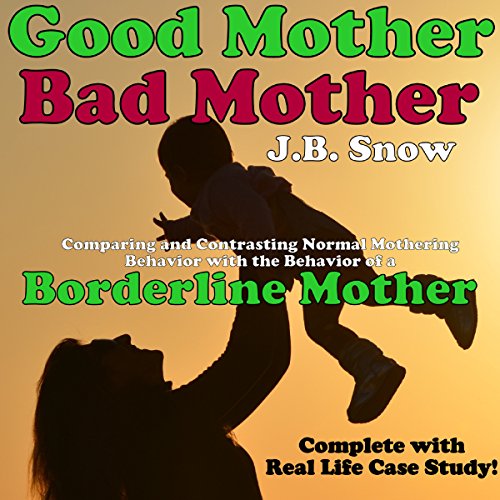 Many people with personality disorders are products of their environments. They were raised by mothers and/or fathers who were either self-absorbed, abusive, neglectful, or cruel. They had genetic vulnerability to be sensitive to their environment instead of gaining the type of resiliency that is bulletproof around adults who are a bad influence to the children whom they watch over.

Most personality-disordered, anxious, traumatized, or stressed people often wonder what a normal mother or a normal family environment looks like. Sometimes, they think that their environment was normal simply because they did not experience physical abuse. But these individuals were often in emotionally invalidating environments where the adults around them only cared about their own wants and needs, often ignoring their children's needs.

This book will discuss the traits of a good mother in contrast with the traits of a bad mother. It will cover real cases of mothers with borderline personality disorder and some of the cruel treatment they gave their children. The children of seriously ill borderline mothers often grow up with posttraumatic stress disorder, borderline personality disorder, schizoid disorder, psychopathy, or narcissism. They can experience a wide range of physical and emotional conditions that are directly related to the chronic stress and the chaos that they lived through as children.

What listeners say about Good Mother - Bad Mother: Comparing and Contrasting Normal Mothering Behavior with the Behavior of a Borderline Mother

Though I believe in concisive declaration of problematic behavrisom as pattern recognition for a therapist to help the client.....I equally am so upset at discription given in this book to problematic BAVIOR yet not much on solutions side. Truly open the DSM 3,4 or 5 the last time I checked and the narration alone is conducive to forming a bias and coertion . nevertheless don't waste the credit if you need solutions more so then well equally helpful condemnation for some. It just depends....I'm a first gen Indian(as in India) women who faces single parenting and comes from a back ground of non favorable upbringing . this book generalizes that a BD mom won't rise above...if the fixed is sold in reason ....then what good is reason to it fixture ...none...so in simple terms if desire and humility work at your center then a nature of that you desire will also be the out come....never the less its not much to help iin thediscovering of your own self.

Its about as long as a magazine article

I thought this was supposed to be a book. It took 15 minutes to listen to the entire "so called book". Trurely I tell you that it is not larger than a magazine article.

The irony of a book about “good” vs “bad” mothers being written & narrated by a man is not lost on me.
it is anecdotal and might be helpful to validate someone who was raised by a borderline mom and needs to be reassured that they are not unworthy.
That said- the description of “a good mother” is often ridiculously out of touch with reality and any mom that I know- with or without any disorders- would consider the expectations set forth by the author to be shaming, judgmental and impossible. Basically... a mom robot.

Wish it was available 5 years ago.
Great story, narrator (best I've heard so far), and lesson to learn.