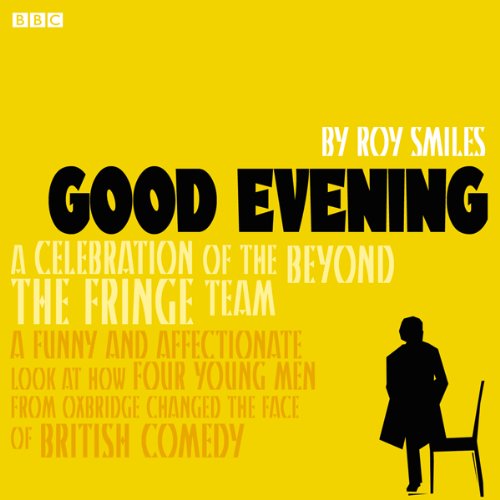 Good Evening: Behind "Beyond the Fringe"

Roy Smiles' celebration of the 'Beyond the Fringe' team takes a funny and affectionate look at how four young men from Oxbridge changed the face of British comedy. Starring Matt Addis as Alan Bennett, Rory Kinnear as Peter Cook, Jonathan Aris as Jonathan Miller and Benedict Cumberbatch as Dudley Moore. A CPL production for BBC Radio 4.

What listeners say about Good Evening: Behind "Beyond the Fringe"

Beyond the Fringe in brief

If you could sum up Good Evening: Behind "Beyond the Fringe" in three words, what would they be?

Good Evening: Beyond the Fringe is a brief, very brief, dramatization of the seminal British comic revue of the early 1960s, Beyond the Fringe. The original show was written and performed by Dudley Moore, Peter Cook, Alan Bennett and Jonathan Miller.

This dramatization uses the decision of the troupe to take their hit London show to New York as the framing device in which to tell the rest of the story, which jumps around chronologically. We're treated to vignettes from each of the performer's growing-up years but in comic tone, as though their adult selves were interpreting their childhoods. These parts are very interesting, almost like short skits.

Roy Smiles, the playwright, has done a good job of introducing us to the young men who created Beyond the Fringe. But I get the feeling that Smiles was working with a radio slot that only gave him 44 minutes to tell a vastly more complicated and intricate story. Which is too bad. Because I wish Smiles had spent two hours unfolding the story of the Fringers--how they met, the creation of their show, the interplay of their characters, the challenges. All that good stuff you can't jam into a small 44-minute program.

All this being said, it's a quick enjoyable listen. Some interesting lines. And now treat yourself and go on youtube and pull up the video of the real guys doing their performance on stage.

Benedict Cumberbatch admirably filled the shoes of Dudley Moore. Actually, all the actors did a great job. Just wish they'd had a longer script to work with.

If you're like me--an American--you may not be familiar with Beyond the Fringe. I heard it was an influence on Monty Python, which is why I picked up this program. John Cleese has said Dudley Moore and Peter Cook were some of the funniest performers he ever saw.