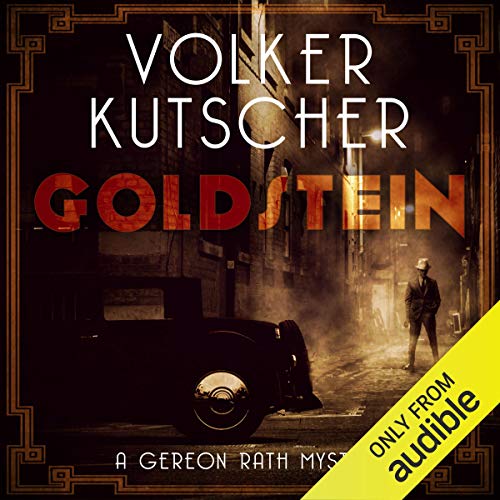 Berlin, 1931. A power struggle is taking place in Berlin’s underworld. The American gangster Abraham Goldstein is in residence at the Hotel Excelsior. As a favour to the FBI, the police put him under surveillance, with Detective Gereon Rath on the job.

As Rath grows bored and takes on a private case for his seedy pal Johann Marlow, he soon finds himself in the middle of a Berlin street war. Meanwhile Rath’s on-off girlfriend, Charly, lets a young woman she is interrogating escape, and soon her investigations cross Rath’s from the other side.

Berlin is a divided city where two worlds are about to collide: the world of the American gangster and the expanding world of Nazism.

I really enjoyed Goldstein and found it to be much more focused than Silent Death.

I watched the TV series and it was excellent. But I love the books! It’s hard to find good old fashioned detective stories; the Gereon Rath series fits the bill! I highly recommend these books by Volker Kutscher.

The plots are deeper, the thirties move along, the characters have more complexity. If you liked the other Gereon Rath books you will love this one! Mark Meadows gets 5 stars, too!

The rise of Nazism begins!!!

The over all bad guys okay, but what made this story more interesting than the other two books was that we are beginning to see the effects of the Great Depression and the repercussions its having on German society, and not just on the average German worker, but on the police too. The love story is a bit weak it like a soap opera and to would have been good to go a little bit deeper into the German underworld. Overall the book was great a must read for this great series.

decent narration as with the other two books in the series but I felt this one limped along.