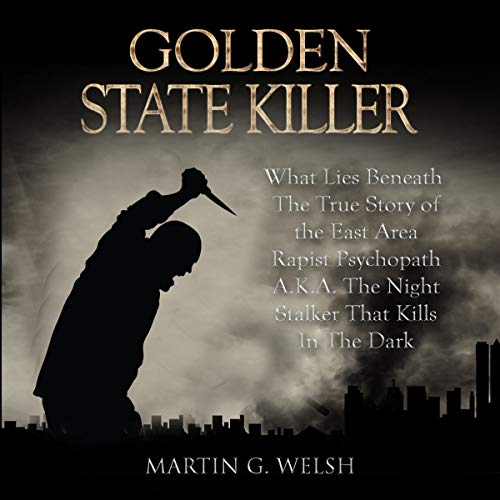 The Golden State Killer was one of the most prolific predators in US history. He terrorized the suburbs of Sacramento and later in his spree, near Los Angeles, hundreds of miles to the south.

This audiobook provides a brief overview of the crimes committed by the so-called “Golden State Killer” who terrorized California for more than a decade. Investigators initially believed the case had gone cold for good and that the killer would never be identified. But the dogged efforts of those who wanted to see justice done, aided by a technological breakthrough, finally led to an arrest and closure for the survivors of the crimes and the families of the victims.

The narrator sounds like he’s reading a speech in front of his class in high school, talking super fast to get it over and done with. I had to slow the playback down.

Just a rehash of everyone else's work. Chapters are 5 minutes long on average, 9 chapters total. Not worth the time or money/credits. Better to just get I'll Be Gone In the Dark by Michelle McNamara and/or Evil Has A Name by Paul Holes

robot narration and the entire book was a half an hour. waste of time.

This is such an interesting story, but I returned this version as it was read by a computer and it is not possible to listen to it!

Really interesting book, would have been five stars if it had been a bit longer and the narrator hadn't left me utterly breathless by the end as he talks so fast!!! I did try slowing the speed but then you were left hanging for the next word! Narrator really needs to work on that as it rather ruined the book for me.