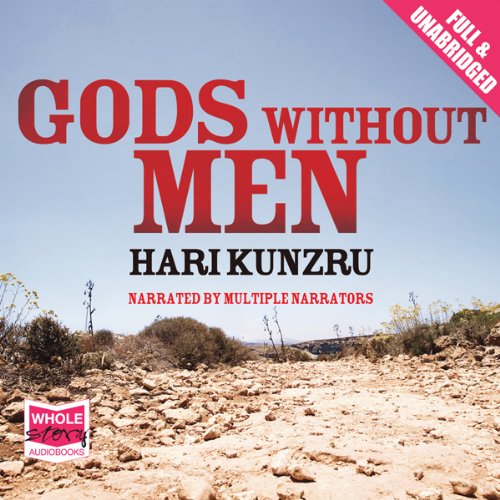 The California desert. A four-year-old boy disappears, plunging his parents into the public hell of a media witch-hunt. But the desert is inexplicable and miraculous, and the family's fate is bound up with that of all those who have travelled before them through this brutally powerful landscape. Multilayered and a compulsively readable, Gods Without Men is a heartfelt exploration of our search for pattern and meaning in a random and chaotic universe.

What listeners say about Gods Without Men

I purchased this novel only because it was on special offer. I had never heard of the author but I liked the sound of the plot and thought if I didn't like it I hadn't spent a fortune, and if nothing else was happy because some of my favourite narrators (Rupert Degas, Lorelei King, Andrew Wincott) were doing the narration. The brief synopsis given by audible, sadly, does not give any idea of what a strange, disturbing, haunting piece of writing this is. To even try and explain the plot, which is told partly in flashback but not in a linear way, would take far too long. Centred around a strange rock formation in the Southern Californian desert, which seems to act as a focal point for all sorts of bizarre characters, some recognisable from recent true historical events, including the financial meltdowns of major economies, the war in Iraq and war atrocities, abducted children, suicidal 'religious' cults, trash TV and shallow celebrity culture. It's all here.

End of world cults, bible-obsessed visionaries, Wall Street speculators, whiz kid computer software designers and rednecks whose paths all cross over centuries, with a common theme of Native American, Christian, Judaic and Eastern mystic texts and a recurring theme of real or imagined strange sightings in the skies. All I can say is that this is one of the most compelling listens I have ever encountered on audible. The narration is quite simply superb, and I was not surprised, and pleased if a little frustrated, that the ending did not neatly tie up all the threads. If you like your listening material to be way out of the ordinary, this book is certainly for you.

Not sure why everyone loves this book. It's a nice idea and I enjoy the coyote character being the mischievous background force but the characters were uninteresting and the stories largely just fizzled out.

Book ended with too many questions​ unanswered..<br />

Perhaps my expectation that a book should end with the majority of key questions/resolved, is a bit naiive, perhaps it should have been subtitled "Book 1 of the Raj trilogy" . At least I wouldn't have been surprised when the book ended with the plucky family heading out across the desert.

Native Indians, drugged out hippies in a commune and seemingly sane individuals experience strange hallucinations in the desert. We slip back and forth over the decades with members of these three groups, while the hunt is on for a missing autistic boy.

The use of multiple narrators was a good touch, especially King and Shale who are favourites of mine; the missing star is because the end was a bit abrupt and I didn't quite understand it.