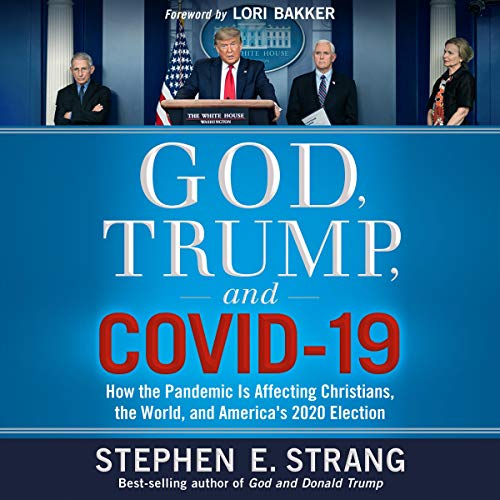 From the best-selling author of God and Donald Trump, which was brandished by the president at the World Economic Forum in Davos.

How the Pandemic Is Affecting Christians, the World, and America's 2020 Election

This audiobook is a timely follow-up to God, Trump and the 2020 Election that reveals insider information about China, the virus, and the ever-increasing stakes of the upcoming election. It will answer the question for the Christian believers (and seekers) of where God is in all this. It provides a little-known prophecy by the late David Wilkerson about a plague coming that would shut down the government as well as churches and bars, including shaking New York City as it’s never been shaken. Wilkerson said this plague would force believers into radical prayer that will spark an awakening - something echoed by Christian leaders and prophets.

Just as the economy was booming and Donald Trump was fixing long-term problems and beating back attacks from his opponents, a brand-new virus shakes up everything including the outcome of this election. The author has inside information about what happened in China early in the pandemic and what went wrong. He even documents how Donald Trump has led the nation in this time of crisis. In 2016, God raised up Donald Trump to lead America at a pivotal time. Evangelicals who recognized this backed him more than any other presidential candidate in history. Heading into Election Day 2020, the stakes are even higher, especially with the uncertainty and upheaval caused by COVID-19.

This audiobook is really “part two” of God, Trump and the 2020 Election, which details the fight for the soul of America. Strang believes people need both books to understand and explain what’s at stake. With the shutdown caused by the pandemic, serious anti-Christian trends surfaced, such as some states closing “nonessential” churches but allowing liquor stores to provide curbside service. Or ceasing all elective surgeries except abortion, which is the taking of a life while the purpose in shutting down the economy was to save lives from this dreaded virus.

What listeners say about God, Trump, and COVID-19

A must read! Definitely an eye opener, recommend to everyone and share with everyone. Thank you