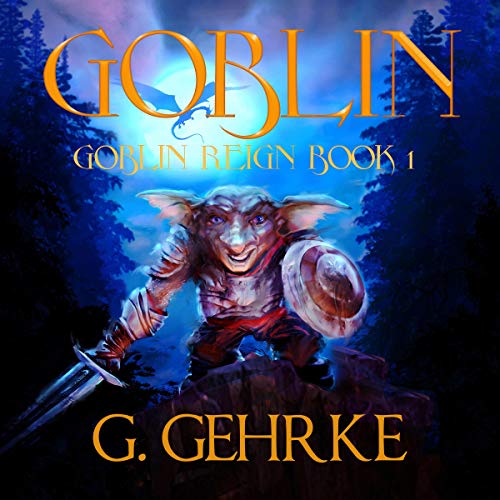 He’s a pint-sized goblin with a dragon-sized problem.

Spicy never wanted anything more than to spend his days in the goblin library as the sage’s apprentice. But his sister Thistle already had the job. Spicy’s dreams are shattered when a human army burns down his village. His sister is abducted and the sage vanishes.

Forced to leave the ashes of his home behind, he must abandon the only place he has ever known, and venture into the land of humans and monsters. Saving his sister will mean uncovering what the raiders were after. For, some things are worth more than gold, and goblins have secrets of their own.

Goblin is the first audiobook in this fast-paced dark fantasy series. Buy it and join the adventure!

Spicy is a Goblin with a big dream. He wants to become an apprentice to the Sage, but his sister is already his apprentice, plus Spicy doesn't read as good or as quick as her. Spicy must become a hunter, but his heart isn't in it. That is until the day that the Humans invade his village in search of their Sage. Spicy and a handful of others are all that's left and Spicy takes it upon himself to pretend to be the Sage's apprentice but his sister stops him and she is taken. It's up to Spicy to try to rescue her and the others before it's too late.

There are numerous books out there that portray Goblins as mindless beasts, so it was such a pleasure to read a book that's different. Here we have a below average Goblin who quickly has to become the hero, but it's not all that hard for him because he has such an amazing heart, and the drive to do it. It's so nice to read a book like this with the POV that of a non human and for it to be such a fun and entertaining read.

Spicy was easy to like and I've become invested in his story. I loved his interactions with the troll and his determination to do whatever was needed. The plot was fast paced and held my attention right from the start. I loved the world building too. It's rich in detail and does a great job of setting the tone for the rest of the series. I'm excited to read the rest and can't wait for them to come to audio.

Gareth Richards read this well. He has a good range of tones and voices, but I just felt like his tones for the females need work. He did do an amazing Spicy though!!

I was given this audiobook at my request and have voluntarily left this review. This in no way affected nor influenced my thoughts.

Goblins are the Good Guys

My first read/listen with Goblin protagonists, and I quite liked it. Their culture here is well developed, along with the characters therein. The human are not nearly as developed, but hey, they're the bad guys... Plenty of action, and magic, and even a dragon. Give it a try, I recommend it!

I love non-human protagonists, so I was immediately drawn to this book. It also slowly opens its worldbuilding to an interesting premise as the plot proceeds. Characters felt realistic, in part because they often did not act the way I wanted or expected them to. It is well-written, and I had no issues with the grammar or diction. I enjoyed most of the banter, and the narrator did a good job with emotion, and an okay job with differentiating characters- though there wasn't a huge range among the goblins and humans,

My complaint with the book was simply that the main character is "good" to a (huge) fault, when it is worst to be so. At times he does bad things, but when I thought he SHOULD do bad things (or even just neutrally do nothing), he creates more problems by doing stupid "good" things. I'd equate it with Batman desperately rescuing the Joker, even though the latter keeps murdering people. It wasn't enough to pull me away from the book, but it did leave me frustrated with the choices several times.

Overall, an enjoyable first book, with a good enough ending that isn't a terrible cliffhanger like so many other first novels. I'm curious to see the world expanded in book 2.

This audiobook was given to me for free at my request and I have voluntarily left this review.

The trials of a lone goblin!

Goblin
Goblin Reign, Book 1
By: Gerhard Gehrke
Narrated by: Gareth Richards
This is an audible book I requested and the review is voluntary. I really enjoyed this book! This poor goblin, Spicy, is bullied by his peers, then disasters happen and Spicy is alone to face so many of them and bullied all the way. But as the book progresses, Spicy continues to try, and try!
There is so much in here but I can't say much without spoiling it. Just that the book is a non-stop adventure, great characters, wonderful world building, has humans, goblins, trolls, and more!
Made for teen or young adult due to a few gore scenes ( probably seen worse on regular tv) otherwise it would be great for middle grade too! Adults would like it too!
The narration was good too!

The main character, Spicy, is intriguing and complex. Cowardly by nature, but bold by necessity. He uses his clever nature to overcome his physical limitations agains the humans and delivers a unique perspective that I often enjoy with non-human mcs. The other characters, especially the troll add to the fun of the story and the secrets to be uncovered about the past make things even more interesting.

The narration was very solid and enjoyable. I struggled on 4 or 5 stars on this one, call it 4.5. The narrator's voice is very pleasing to the ear, but does not really have any goblin quality to it, since the human voices are similar. I feel like there should be some distinction, even if it was goblins sounding normal and humans sounding odd due to perspective, but this is a minor quibble.

I am certainly excited to see what happens next in the series.

I was given a free copy of this audiobook in exchange for an unbiased review.

What a fun and different book, I really enjoyed it. Told from the goblins’ perspective, the story is cleverly written and engaging. It was really interesting seeing the author develop there’s characters. I’m looking forward to the story continuing.

Narration was well done, sound quality was high. I felt closer to the characters because of the narration, which is always a great thing!

a great tale of a small unlikley hero ! absolutley lived this adventure!

and the narration was top notch , think I'll look for more from this narrator

I have received a free audio copy of this book in exchange for my fair and honest review.

Human raids from a goblin point of view

We always see the view of the heroes...humans and elves and dwarfs as they slaughter evil goblins. Welcome to a different point of view, the view of the goblins whose homes are burned, people slaughtered, all for the humans to discover a secret the goblin lore keepers have kept for centuries. Embark on a journey with an unlikely hero to save his friends, family, his peoples history and their future. I was voluntarily provided this free review copy audiobook by the author, narrator or publisher

This book was just fun to listen too!! So I am a gamer and I was expecting, well goblins! Mean viscous, evil little creatures that attack in swarms anything they think they can overwhelm lol, But what I got was an English narrator who game me proper sounding British goblins Spicy and his sister Thistle which had nothing evil about them. He and sister are smart clever creatures with more civility than I would have ever thought possible. I cant wait for book 2 which should start out with "A dragon, a goblin and a Troll go into a tavern"!!! lolol!!! This book was given to me in exchange for my opinion and I must say to you the reader of this review that if you are looking for a fun intriguing book to listen to or read, this is it!

Good story with narration that brings the characters to life.

A story of perseverance.

A goblin who wants to become a Sage goes through hell on his journey.

The struggle is real.

Colourful story, and beautifully narrated. Listened whilst eyes closed which made the characters come too life. Great narration

I enjoyed this first book in the series. The idea seemed novel, with focus on Goblins rather than Humans. I liked the characters, and especially Spicy. The Dark part of this fantasy comes from the death of a number of characters close to Spicy. The only weakness I found in the story is that I did not feel particularly sad at the loss of these characters...I think it is because they did not seem to particularly affect Spicy. I also did not particularly despise the villains. To really get to the Love It stage of a review, I need to feel connected to the same things the main character is connected to. Outside of this minor complaint, the story was original, fast-paced, and kept me interested. I am looking forward to the rest of the series.

The narrator does a good job and seems to well suited for this series. I don't know why we Americans seem to associate British voices with fantasy, but his fits perfectly.

I was given a free copy of this audiobook at my request, with no requirement that I leave a review, but I feel this story deserves recognition, so have left this review.

I want to like the story but felt like I was going through the motions of just listening to the chapters instead of enjoying them or looking forward to hearing more.

Gareth Richards voice choice for the MC was a bit too generic and didn't sound like a goblin. He had a good clarity but throughout the whole book he used very much the same tempo. This lead to the lack of excitement or any urgency. Also he struggled with conveying a believable female voice

Apart from the the book mentioning they were goblin a few times I could easily forget about that fact and the MC could be a young human. The MC didn't have much to like about him and didn't have much progression for me to care much about him or his actions. The side character were much the same. Nothing really drew me to any of them.

The most memorable part of the book was the interactions with the Troll. This was interesting, distinctive and had a whole different perspective on the world around them.

This was a bit too tame for my liking and probably aimed more towards very young adults as the violence, gore and action was very mild.

[Note - I was given this free review copy audiobook at my request and have voluntarily left this review.]