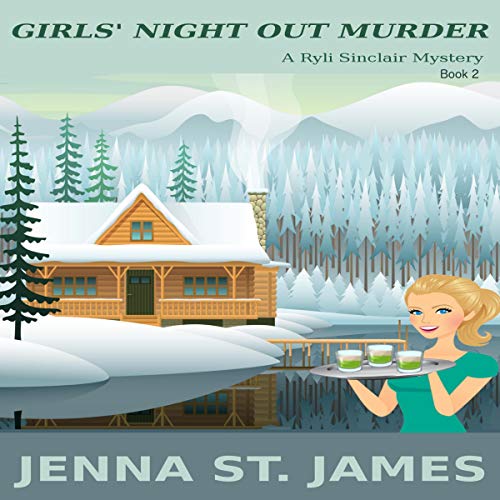 Come along and join in the madcap adventures of Ryli and Aunt Shirley on their latest and most hilarious mystery yet. The daring duo will have you holding your sides laughing, one minute, and holding your breath in anticipation, the next.

Wedding bells are pealing madly for Matt and Paige. While Ryli and her wisecracking sidekick Aunt Shirley should be hard at work preparing for the bachelorette party and wedding at the family lake house, they instead find themselves smack-dab in the middle of a murder investigation.

Ryli is targeted by the Cavern Beach police department as the number one suspect in the crime. Hoping to stay out of jail and make it to the wedding on time, Ryli and Aunt Shirley jump in headfirst to catch the killer.

Between popping jello shots and interrogating reluctant strippers, Ryli and Aunt Shirley chase down clues to narrow their list of suspects, but will they find the real killer before the wedding ceremony and before Ryli is taken into custody for the murders...or, more importantly, before Ryli ends up being the next victim?

What listeners say about Girls' Night Out Murder

I don't get it

I don't get the overwhelming positive reviews for this book. The narrator was just barely. There was no real separation from characters (unless you are talking about the cringey voice for Aunt Shirley) and I was never quite sure who was talking. This listen got real confusing real fast. I didn't finish.

My wife isn't much of a reader/listener, but requested some books that she may enjoy, Apparently this isn't one of them. She said its too much like a Soap opera

This book was not for me

I didn't particularly enjoy this book because I didn't find the antics funny as I was led to believe they would be. It felt like the Aunt was just an alcoholic. The only thing I did enjoy was the female sleuthing part of the book. I was given this free review copy audiobook at my request and have voluntarily left this review.

Different then what I thought, some laugh out moments , and plenty of mayhem. Ryli finds murder and trouble. Interesting ser of characters. Given audio for my voluntary review and my honest opinion

If you find drunk old ladies funny, you might enjoy this story. I found Aunt Shirley crass and inappropriate. Despite there being a mediocre mystery, it was just chick-lit to me. The narrator was good.

This was a lot better then the first book in my opinion. It had laugh out loud moments, suspense, intrigue and a little romance.
If you like mysteries with funny sleuths then this is for you.

Laugh your sox off! I mean, not even the first murder was funny or the fact that it happened a few days before the wedding they came back to town for, it's the characters! There's Auntie Shirley and the police chief and the obsessed real estate agent for starters. I loved it!
Shoshannah Kramer does a great job of giving appropriate voices to the characters as well as the general narration.
I won this audiobook in a giveaway! I win!

loved this listen.
keeps you guessing in the who done it.

Aunt Shirley is the best

What goes great with a wedding? Murder of course. Of courser Ryli has to discover the body. This book had me laughing with the antics of Aunt Shirley. I was kept so entertained with Aunt Shirley and Ryli's investigating. I really like this series and will definitely continue with it. I was gifted this book free of charge in exchange for an honest review.


The narrator does a fantastic job as well.

I was given this free review copy audiobook at my request and have voluntarily left this review. I love this series. Aunt Shirley makes me laugh and I hope to be so carefree and strong when Im her age! Riley is such a lovable character. The story was awesome. I love the narrator. I need more!

Good reason for a night in

This is the first book by this author that I have listened to or read but it won't be the last as I really enjoyed it, I might have to get book one. I liked the characters but especially the feisty Aunt Shirley and found her antics very funny but glad she isn't my aunt or I would have died from embarrassment. The mystery was good but I had worked out who the killer was before the end of the book. Still a good listen that I enjoyed.
Ryli's brother is marrying her best friend but things don't run smoothly for the happy couple. First they have to deal with a drunk aunt Shirley helping to plan there big day. The second problem is when the girls arrive at the lake house cabin they arrive just in time to get caught up in a murder. Ryli is the one to find the body and automatically becomes the number one suspect in the eyes of the police. Under the fear of being arrested Ryli and aunt Shirley start to question old friends and follow clues in the hopes to solve the murder before the wedding. Despite the murder casting a dark shadow over the whole presiding the girls decide to go ahead and have the hen party, that is until the police break up the celebrations with the news that another close friend had been murdered and they are looking even harder at Ryli. Can Aunt Shirley put down the jello shots and cake tasting samples in time to get to the bottom of the murders?
I like the narrator and thought she did a good job giving each character there own voice and bringing the story to life.
I was given this free review copy audiobook at my request and have voluntarily left this review.

I'm enjoying this series a lot. The characters are fun and quirky and the mystery is well thought out. A very enjoyable listen. I will be continuing with the series. I voluntarily reviewed a gifted copy.