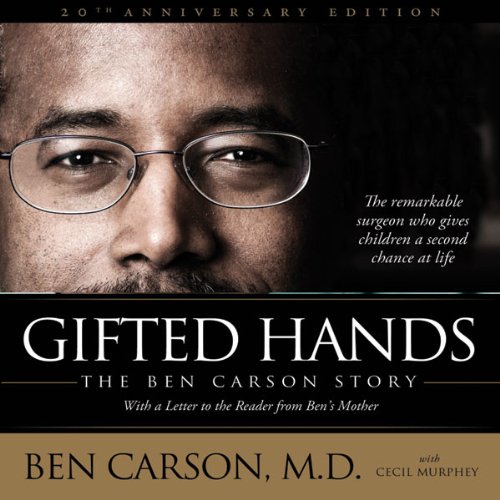 In 1987, Dr. Benjamin Carson gained worldwide recognition for his part in the first successful separation of Siamese twins joined at the back of the head. The extremely complex and delicate operation, five months in the planning and twenty-two hours in the execution, involved a surgical plan that Carson helped initiate. Carson pioneered again in a rare procedure known as hemispherectomy, giving children without hope a second chance at life through a daring operation in which he literally removed one half of their brain.

But such breakthroughs aren't unusual for Ben Carson. He's been beating the odds since he was a child. Raised in inner-city Detroit by a mother with a third-grade education, Ben lacked motivation. He had terrible grades. And a pathological temper threatened to put him in jail. But Sonya Carson convinced her son that he could make something of his life, even though everything around him said otherwise. Trust in God, a relentless belief in his own capabilities, and sheer determination catapulted Ben from failing grades to the top of his class - and beyond to a Yale scholarship, the University of Michigan Medical School, and finally, at age 33, to the directorship of pediatric neurosurgery at Johns Hopkins Hospital in Baltimore, Maryland.

Today, Dr. Ben Carson holds 20 honorary doctorates and is the possessor of a long string of honors and awards, including the Horatio Alger Award, induction into the "Great Blacks in Wax" Museum in Baltimore, Maryland, and an invitation as Keynote Speaker at the 1997 President's National Prayer Breakfast.

Gifted Hands is the riveting story of one man's secret for success, tested against daunting odds and driven by an incredible mindset that dares to take risks. This inspiring autobiography takes you into the operating room to witness surgeries that made headlines around the world - and into the private mind of a compassionate, God-fearing physician who lives to help others. Through it all shines a humility, quick wit, and down-to-earth style that make this book one you won't easily forget.

What listeners say about Gifted Hands: The Ben Carson Story

Thoroughly loved it! it's a great tool for my kids & I. So grateful! Thanks.

Everyone needs to read this book. Very inspiring. I listened to this with my family on a long drive, and they were rivited.
Can't recommend it enough.

Loved this book. Both of my teen daughters found it motivating and moving. Very well narrated.

I loved listening to this book & getting to know Ben Carson. Greatly written, easy listening, the narrator's voice was perfect. I just wanted to keep listening to the end, such a great life story, so encouraging, a powerful book. Thank you Ben Carson for your dedication to God/Jesus, your family & saving people's lives.

Rising from the ashes

The story of an arrogant man. In describing the events of his examination questions being miraculously shown in his dream, I thought 'nah, that's too much'.
I'm a Christian but God is not a magician who fills in gaps when need arises. .

My book club selected this book and at first look I was going to skip it. I would have missed out. Dion Graham's pleasant voice brings you through Ben Carson's amazing life, from a struggling black kid in Detroit, raised by a single mom, through his college years, how he chose his profession as a pediatric neurosurgeon, internship, residency, etc. I'm most impressed with how he turned to God in times of trial, and gives the credit to God for who he has become and the things he's been able to do in his life.

Like I said, I didn't want to read it at first, and the first few chapters he did sound like a bragger at times. However, his mom Was pretty amazing, and it's hard to tell your own story, getting to the top of your class, etc. without sounding a little bit big headed. But somewhere along the story, my heart changed and I became very impressed with this guy. He ends the book with his advice on how everyone can succeed. THINK BIG

I coincidentally finished this book about the same time that Ben Carson spoke at the Presidential Prayer Breakfast, so I watched that on YouTube, and again was very impressed with this brilliant surgeon, patriotic, soft spoken, God fearing, incredible man.

I recommended this book to my dad and I recommend it to you!

A very good look into the life of Ben Carson and how he became who he is today. The narration is also very good.

If you could sum up Gifted Hands in three words, what would they be?

Gifted Hands is a very inspiring book, I could not put my earphones down. I was in tears at certain times. His faith is something out of this world. The narrator was excellent, he kept me glued.
I have just ordered a paperback version and DVD for home library. kids need to read his story while they are still young.

What other book might you compare Gifted Hands to and why?

Monk who sold his Ferrari. Both are stories with soul.

Too many:
his anger chapter
the tumor guy
the twins
the haux exam

Once I finally concentrated I wanted to finish it one day but hey one has to sleep but I finished it in less than 24 hours.

This is a must have for every household, school, library, teachers, perfect gift

Such a motivating story. A must read.

Carson's story is truly inspirational. I felt so propelled in my personal life in reading it. Definitely a book for someone starting college or a new career.

I enjoyed this tale of Dr. Carson and the events that led to his success. His movement through the educational and career process was inspiring and a pleasure to read.

I loved this book. Great look into the life of a man who knows exactly where God has placed him. Very humble man.

I loved this story. So inspired after reading it. What a humble yet great doctor ben carson is.

Where does Gifted Hands rank among all the audiobooks you’ve listened to so far?

Inspiring story of a talented man willing to work hard for his goal in life!

Would you listen to Gifted Hands again? Why?

Yes I would listen to it again so I could get more out of it, or hope to the second time around.

He did a pretty good just

Carson tells about his youth growing up in a poor black neighborhood in Detroit. Apparently when he was eight years old he decided he wanted to become a physician. He speaks highly of his mother keeping him on track toward his goal. He tells of going to Yale and feeling he did not belong there amongst the wealthy students. He went on to the University of Michigan for his medical school. He is one of eleven African Americans to become a board certified neurosurgeon. He became head of pediatric neurosurgery at John Hopkins University hospital. In 1987 he became famous for successfully separating conjoined twins. The Binder Twins had been joined at the back of the head.

Carson writes openly about his faith and the Seventh Day Adventist church he belongs to. Carson has won many awards including the 2008 Presidential Medal of Freedom presented to him by President George W. Bush. He has written six books and many professional articles for medical journals, and since 2013 writes a column for the Washington Times. In 2009 there was a made for television movie about Ben Carson’s life shown on the TNT channel. The book was co-written with Cecil Murphy and Dion Graham narrated the book.

Inspirational and enlightening audio book autobiography, which filled me with awe. It was great to learn of someone gifted by God. Had it not been for his mother, he may not have flourished, but God was very much in control. This wonderful example of God-led, humble neurosurgeon is so inspirational, and would be such an ideal role model for any Christian surgeon, medical doctor or GP. Actually, an example for any Christian 'head of Department', professional, anywhere.

I Loved it. I finished it in 2 seatings. The voice narrator was perfect for the story.

This is an inspiring book

When God is put at the centre of our everyday lives, our hands will be blessed and called Gifted Hands.
I enjoyed this book.

English is my second language, and yet, the narrator's voice was very clear.
The book itself? Every time I need a source of inspiration, I'll come back to listen to Ben Carson saying "I didn't do it for the competition, I did it because I wanted to be at my best"

I am a neurosurgery trainee.
I truly love it.
I found it very motivational.
5 Stars
please watch Gifted Hands movie too.

I loved listening to this audio book it is written so well that the imagination could visualise it very easily into ones own movie! It is easy to listen to and very well narrated. Ben Carson has been very honest about himself which is encouraging for those who can relate to his up and downs in life and use them to rise to ones full potential. I highly recommend this audio book.