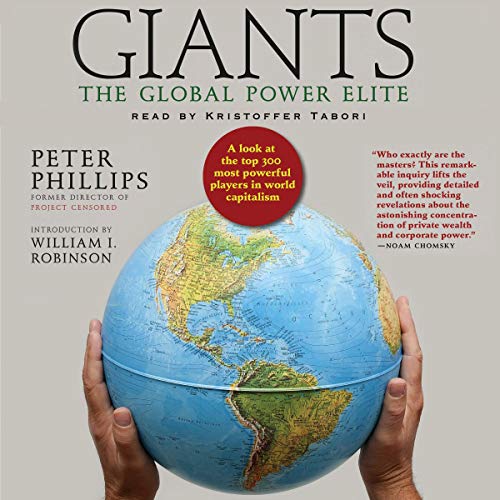 A look at the top 300 most powerful players in world capitalism who are at the controls of our economic future.

Who holds the purse strings to the majority of the world's wealth? There is a new global elite at the controls of our economic future, and here former Project Censored director and media monitoring sociologist Peter Phillips unveils for the general listener just who these players are. The book includes such power players as Mark Zuckerberg, Bill Gates, Jeff Bezos, Jamie Dimon, and Warren Buffett.

As the number of men with as much wealth as half the world fell from 62 to just eight between January 2016 and January 2017, according to Oxfam International, fewer than 200 super-connected asset managers at only 17 asset management firms - each with well over a trillion dollars in assets under management - now represent the financial core of the world's transnational capitalist class. Members of the global power elite are the management - the facilitators - of world capitalism, the firewall protecting the capital investment, growth, and debt collection that keeps the status quo from changing. Each chapter in Giants identifies by name the members of this international club of multi-millionaires, their 17 global financial companies - and including NGOs such as the Group of Thirty and the Trilateral Commission - and their transnational military protectors, so the listener, for the first time anywhere, can identify who constitutes this network of influence, where the wealth is concentrated, how it suppresses social movements, and how it can be redistributed for maximum systemic change.

“Adam Smith warned that the ‘masters of mankind’ will pursue their ‘vile maxim: All for ourselves, and nothing for other people.’ There could hardly be a more apt description of the recent era of savage capitalism, straining for new heights under cover of Trump’s antics. Who exactly are the masters? This remarkable inquiry lifts the veil, providing detailed and often shocking revelations about the astonishing concentration of private wealth and corporate power, its institutions and integrated structure - and not least, its threat to civilized and humane existence.” (Noam Chomsky)

What listeners say about Giants

Interesting book, probably better to own a copy

Interesting analysis, however a lot of reference to pdf. I'd prefer to own it outright as having the narrator speak through a series of data points doesn't translate to audio well.

loved the specific detail, some Richie's were definitely calling their lawyers on the specificity methinks