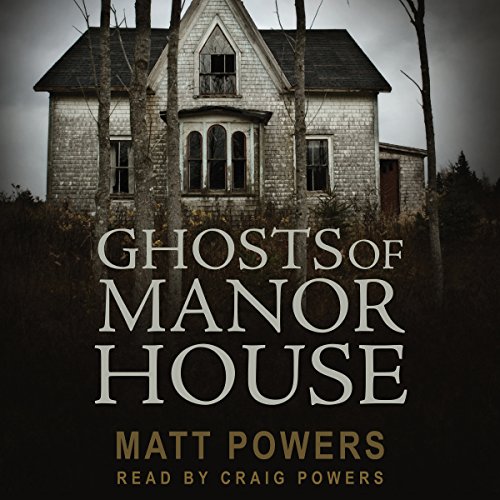 Edmund and Mary Wilder are very much in love. But the death of their young son, Tommy, has shattered their family. Edmund is determined to bring them back together, drawing on the only bit of strength he has left - his love for Mary and their daughter, Stephanie. But Mary sinks deeper into depression while little Stephanie's anger grows. Edmund flounders in his attempts to rescue his family from the brink of collapse and doesn't know where to turn.

Then Mary receives an invitation for the family to become guests at Manor House, a seemingly quaint bed and breakfast. This, she assures her husband, is the answer to all their troubles.

Edmund arrives ahead of his family to spend a couple days working on his long-delayed novel. But his growing curiosity about the old house leads Edmund to an encounter that will change him forever.

What will you sacrifice for love?

An old fashioned psychological thriller with a nod to Stephen King, Manor House will keep you guessing and compel you to listen to the very end.

A mother will sacrifice anything for her children. A husband will risk everything to save his wife. Manor House will take them all.

What listeners say about Ghosts of Manor House

The Haunting of Manor House

I listened to this entire book in one sitting while driving which I think really helped to keep my attention. I loved the start and loved the ending but got bored in the middle. I thought there was a lot of potential for the house and the story line but the mystery of the house didn't seem as mysterious to me as it could have been.

Craig Powers has a wonderful voice and really did the characters right.

I truly enjoyed listening to this story as right from the beginning it brought back undertones of Stephen King's "The Shining" one of my all time favorite horror stories. That said, the author has a voice that's all his own and a very promising one. The paranormal story is based on very human responses to tragedy and loss and the overwhelming need to recapture happiness, doesn't matter the cost.

Most of the characters were very well defined, but I found that the children, especially the lost child, were just sketched portraits. It would have been nice if the author had made them feel more "involved" in the overall storyline. A little puzzling was also the clairvoyant character, which seemed to appear out of nowhere. I can understand the need for a clue to pursue by brother Charlie in his quest, but the means to obtain it seemed a little disconnected.

The narration was also superb and the writing skills outstanding. A book very well worth reading.

If you don't pay close attention to this one, you may find you don't know what's going on - a complex and intricate story, this book requires your full focus. Manor House has a dark history that cannot be denied, that has more control over people and things than a house should. The house seems to call to those who are in despair, promising to heal their grief. But in order to accept this eternal gift, they have a difficult decision to make. If you enjoy paranormal stories by the likes of Stephen King, you'll enjoy this one too!

I rated this as a 'tween' book.It is definitely not written for adults,although that is how it was portrayed in the writ up.It is a good,basic ghost house story.Read in a way that makes you think he is reading to children,Craig Powers is a decent narrator.I would have enjoyed this when I was about 11.“I was voluntarily provided this free review copy audiobook by the author, narrator, or publisher.”

This is not your typical ghost story

This is about Edmund and Mary with their daughter Stephanie needing to take a break (vacation) and resolve some issues after losing one of the twins Tommy who drowned. On to The Manor House where there are many twists and turns and enjoyed the characters of Mrs. Crane and Lucas. Recommend to anyone who enjoys psychological thriller with ghost. I was given this free review copy audiobook at my request and have voluntarily left this review. Thank you!

Psychological Thrillers are tricky things. They draw you in. Twist you up. Then leave you scratching your head wondering. Well this one did that for me anyway.

There were moments when I felt I needed to quit listening to this., but it was rather compelling. I had to continue. I was pretty sure I knew what was going on an how things would go. But, it didn't matter. Manor House held me hostage.

I guess the author did a good job then. Isn't that what a psychological thrill is supposed to do?

The authors family and friends must have been the only ones to review this book. It should be under the children’s section.

First off the performance was fantastic. And I'm not sure if the same last name of the narrator and author means they are related, but no matter -- the narrator Craig Powers was wicked good.

There were times I was confused and had to rewind to make sure I didn't miss something important because of how hard a time I had following the story of Edmund when he was in the house. And the fact that he accepted the runaround BS he got from the caretaker when asking direct questions frustrated me. I had those same questions, and it reinforced my confusion when Edmund didn't get the direct answers that both he and I were seeking.

But things eventually sorted themselves out, and above all, I judge an audio book on whether I can't wait to get back to it, and this book satisfied that desire. I was given a copy of this book in exchange for an honest review.

This was a decent ghost story. The story was a little bit boring, but did capture enough of my interest that I finished the short, 4 hour long book. The narrator was a bit monotone, which may have contributed to the boredom I felt. All in all, it was OK.

Ghosts of Manor House is the story of Edmund and his wife and child. They're trying to recover and get their family back to a good place after the accidental drowning of their other child, so they decide to get away for a bit and visit Manor House. Edmund plans on arriving a bit early to work on his latest novel.

I have mixed feelings about this book. For me at least, it was a predictable story, though I still listened to the end. I felt that they story dragged on a bit and got bored...okay, I was kind of bored the whole time. I really enjoyed the epilogue though. Not to give away any spoilers, but it was a nice little way to explain a few other characters that we met during our visit to Manor House. The narration was, as another reviewer noted, fairly monotone and I really think that having a bit more emotion while performing would have added to the story a bit. Edmund sounded the same when he was scared as when he was happy. It was easy to understand Mr. Powers though, and the production quality of the audiobook was good.

I was voluntarily provided this free review copy audiobook by the author, narrator, or publisher for an honest review.