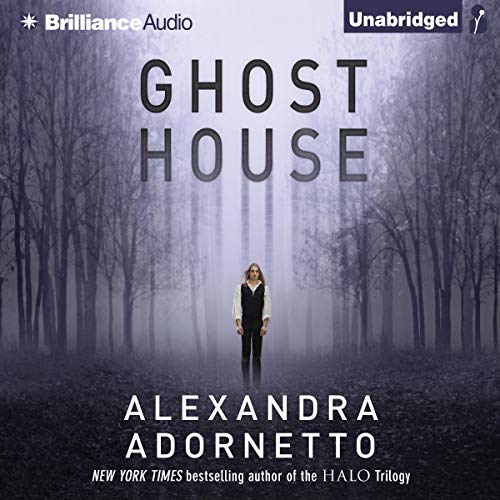 From the New York Times best-selling author of the Halo Trilogy comes the start of a beautiful and powerful new series.

After the loss of her mother, Chloe Kennedy starts seeing the ghosts that haunted her as a young girl again. Spending time at her grandmother's country estate in the south of England is her chance to get away from her grief and the spirits that haunt her. Until she meets a mysterious stranger....

Alexander Reade is 157 years dead, with secrets darker than the lake surrounding Grange Hall and a lifelike presence that draws Chloe more strongly than any ghost before. But the bond between them awakens the vengeful spirit of Alexander's past love, Isobel. And she will stop at nothing to destroy anyone who threatens to take him from her.

To stop Isobel, Chloe must push her developing abilities to their most dangerous limits, even if it means losing Alex forever…and giving the hungry dead a chance to claim her for their own.

What listeners say about Ghost House

Would you consider the audio edition of Ghost House to be better than the print version?

I have no idea about the printed book, but loved the audio version.

Did Emily Foster do a good job differentiating each of the characters? How?

Ms Foster did a reasonable job, didn't quite get he English accent down but didn't stop me from listening.

I don't know about emotional reaction, but kept me awake all night listening...no sleep that night.

Really enjoyed this story and can't wait for book 2.

The story is typical YA romance but enjoyable. The narration was well done, only criticism is having the narrator voice all the characters. Sometimes it's more effective to have a male voice, especially for the romance!

This books started out well, it grabbed my interest quite quickly and then went down hill. The love interest was slightly unlovable and the story was pointless and dragged. I was just listening for the sake of it. The very Very end earned an extra point or two from me, annoyingly now I need to read the first few chapters of the next book. Overall pretty boring, nothing special. The girl who read it had a lovely voice. I would recommend this book to a 15-17 year old girl.

Left behind a bit

An interesting tale of Chloe Kennedy who along with her young brother was sent to live with her grandmother in England where she meets Alex Read a ghost for over 150 years and his evil paramour. It seems Alex made mistakes in his life that he is paying for as an unhappy spirit. Chole becomes fascinated with him and Isobel, the ex, goes into violent rages, yes she is still here too. There is a living breathing young man, Joe, who is also interested in Chloe. If you like ghostly tales this one sets the reader up for the next book.
For a good portion of the tale you may have some sympathy for Alex and disgust of Isobel, Joe is almost a paper cutout figure and as too Chloe, at 16 she would have been fine but at 18 her actions/attitude appeared a bit off. By the time I got to the final history of the Alex and Isobel I was flummoxed. The tale of the two lovers had me scratching my head to figure out what was going on. The ending is a cliff hanger and I am still is hopes that the next edition will tie up all the loose ends and see a slightly more developed Chloe.

What did you love best about Ghost House?

I loved Chloe's character's interaction with Alex and how he "fell" for her.

What other book might you compare Ghost House to and why?

If Walls Could Talk

Have you listened to any of Emily Foster’s other performances before? How does this one compare?

No, but it was great.

"Where you come to experience the afterlife."

I loved this Audio Book, it has a really good story line! Full of romance, mystery and a touch of horror, such a good story! The performance on the other hand is terrible! The performer is terrible at doing an English accent! It annoys me!!! But besides that, the story is wonderful!