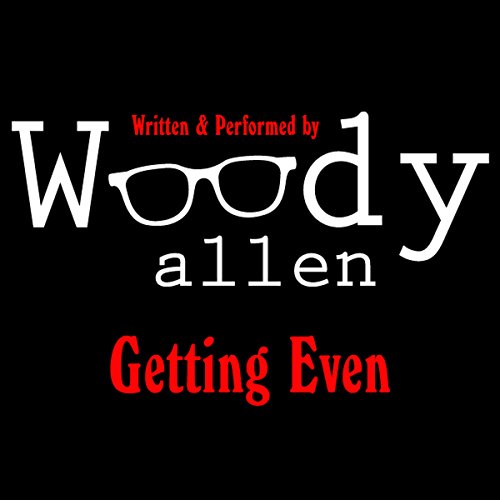 Woody Allen's early comic fiction was heavily influenced by the zany, pun-ridden humor of S.J. Perelman. And now, for the first time, Woody Allen narrates one of his early collections of short stories, Getting Even. Listen to Woody Allen revenge himself on such significant subjects as death, obesity, organized crime, the invention of the sandwich, and much more.

Getting Even is a collection of seventeen of Allen's magazine pieces, discussing such eclectic topics as the invention of the sandwich, laundry lists, death, obesity, and, of course, rabbis. Here's Woody Allen as psychologist: "...death is an acquired trait."

Historian: "I did not know Hitler was a Nazi. The truth was, for years I thought he worked for the phone company."

Philosopher: "I do not believe in an afterlife, although I am bringing a change of underwear."

Woody Allen’s short-story collections Getting Even, Without Feathers, Side Effects, and Mere Anarchy are available separately or together as part of The Woody Allen Collection.

"Throughout my life, literally thousands of people have made me feel inadequate, but none more so than Woody Allen." (Larry David, Producer, Writer, Actor)
"Woody Allen brought modern comedy to the cinema screen." (Ricky Gervais)

What listeners say about Getting Even

Get read for awkward stares...

Get ready for awkward stares on the subway, on the street, at a restaurant or wherever you listen to any one of the brilliant stories in the book.

Written in Mr. Allen's prime, the 70's, these stories would be hilarious if read by your tax accountant, much less by the witty neurotic performer that is Woody Allen.

If you could sum up Getting Even in three words, what would they be?

Have you listened to any of Woody Allen’s other performances before? How does this one compare?

I have not listened to any other audio books performed by Woody Allen before, but I would have to say that he does a cracking job in this one.

Yes, I had an extreme reaction to this book: at one point I laughed so hard that I had tea spurting out of my nose and my monocle popped out. This was followed by a a brief exclamation of "damn" (as I had made a mess of my table cloth) and a rather violent throwing of a napkin to the floor. Fortunately I was able to regain my composure quickly and by the time my butler had arrived to investigate the commotion I was once again calm.

If you happen to have a time machine, please go back in time and convince Mr. Allen to produce more works of this kind.

While not absolutely essential, an at least cursory knowledge of the topics will add tremendously to the listener's enjoyment of Allen's remarkable talent in finding humor in what might otherwise seem rather humorless material.

This is one of the few books I can see myself returning to again and again whenever my spirits need a lift!

No one else could read this. I first read his autobiography and laughed through the whole thing... well, not the serious stuff, I’m not a monster. But the parts that are intended to be funny are much more than funny. Smart. Thoughtful. Performed by a genius with perfect comedic timing. Thank you, Mr Allen

So entertaining. Loved it!! So funny. There is no one who can compare to his genius!!

Some of Allen’s best, most clever material from early in his career when he was a regular contributor to The New Yorker and the successor to S. J. Perelman as America’s most thoughtful humorist.

Hard to find fault with this collection. Hard to pick a favorite. Maybe "Notes from the Overfed."

Woody Allen has given an amazing performance here. Specially the chapters about a chess game between two friends (or foes) and about a private detective searching for God had me double up with laughter as I listened to them while driving .

I think Allen has a dull brilliance to inspire younger generations and teach them well.

5 Stars all the way! You can't beat this, Woody Allen reading his own words is just downright hilarious. Great pick up!