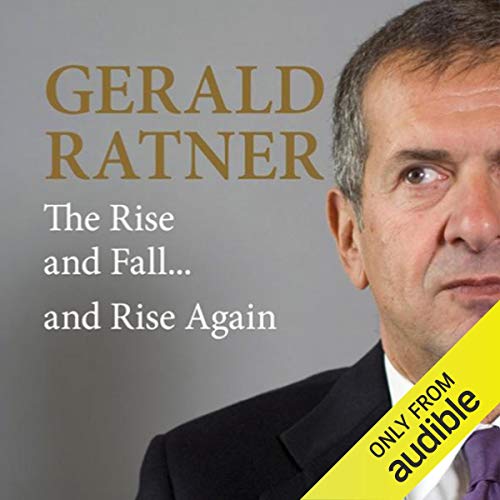 In 1991, Gerald Ratner was booked to make what should have been an everyday speech at the Institute of Directors. Should have been. When the word "crap" came out of his mouth in connection with a decanter and a glasses set sold by his company, H. Samuel, it all turned out slightly different.

The Rise and Fall...and Rise Again tells the full story, in Gerald Ratner's own words, of what lead him to that point at the IoD, the horror of what happened in the immediate aftermath, the fallout, and the comeback. This is the first time Gerald Ratner has given his side of the story. And what a story it is. You'll find out:

What listeners say about Gerald Ratner: The Rise and Fall...and Rise Again

An awesome story about the good times and bad times of business. As well as highlighting the fact that loosing it all can come from something small that was perceived to be meanial.
It's a great listen when you have just lost it all and are thinking about getting back into another business.

this book is one of the most interesting books i have ever read must read !

I can resonate with the story

It was a truthful and honest story written and narrated with candor, hope everyone can get their own takeaway from this book

I had the pleasure of meeting Gerald Ratner at what was the Waikaloa Hyatt while on a company trip around 1991. As an employee of Kay, Sterling and Signet jewelers for over 40 years I’ve many times wondered what had gone on during those times and after reading the book have came away inspired by the story of Gerald’s recovery and success.

What a retail tale.

I've heard Mr Ratner speak. Brilliant, laugh out loud and then ponder his highs and lows. This book is the same. He keeps up the speed and tells it how he sees it. Often self deprecating and never dull. Particularly interesting reflections on the 80s culture.
I love the author reading the book. Great. But Mr Ratner is no actor and frequently trips up on his own prose. (and some poor production as is so usual in audiobooks - did producers never hear of the modest silence needed between paragraphs?)

Loved the story and delighted he sounds a happy and wiser man by the end.

Would you consider the audio edition of Gerald Ratner: The Rise and Fall...and Rise Again to be better than the print version?

I read the print version however the audible version narrated by Gerald is how the book was intended to be read. This is my first audible book, this medium works.

Gerald Ratner - just proves that with some tenacity and perseverance you can make it to the top. It's a mindset.

Which character – as performed by Gerald Ratner – was your favourite?

Entertaining and enlightening at the same time.
Really touched the human aspects, a pleasure to read.

What an amazing man!

You need to listen to this! The 'real' story of a man that never gave up is really inspirational.
It just goes to show you what you can achieve if you put your mind to it.
Thanks for sharing Gerald!!

I especially enjoy autobiographies about businessmen and this is one of the most enjoyable I have listened to. Some people comment about his narration, to me it made it sound even more real and definitely added to the charm of the book.

Enjoyed it , knew the headline story, great to hear the background story , and find out about how life shapes people.

Great story, feeling really privileged to have met Gerald (and taken a selfie with him)
It’s also great that he read the book too, and is the first audible that I couldn’t “put down”, the story was so captivating .

Not only is this offering a must for any entrepreneur or business person - it's also a must for anyone seeking a compelling biography of a resolute, determined leader.

Very inspirational story and I enjoyed hearing it from the horses mouth. I don’t think it would have come across as real if this was narrated by someone other than Mr Ratner
Highly reccomended