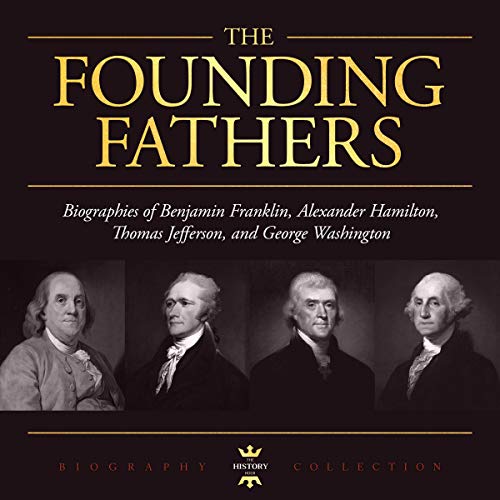 By: The History Hour
Narrated by: Jerry Beebe

The following book introduces the listener to the biographies of four key figures who led the American Revolution against the Kingdom of Great Britain: George Washington, Alexander Hamilton, Thomas Jefferson, and Benjamin Franklin.

George Washington lived an incredible life, during a time that can be hard to comprehend. In this version, you will find things about George Washington that might surprise you and that you did not know before you heard this book. You will find out that he was the type of man that tried to lay things out in such a way as to make his opponent look bad or if need be, to bend the truth if necessary.

Alexander Hamilton’s story seems like a classic tale of rags to riches, of a poor boy whose hard work and perseverance allowed him to become one of the greatest historical figures of a nation. At the completion of this book, you will have a good understanding of the amazing life he lived

Thomas Jefferson was one of the men who helped to bring the United States into being, and he shepherded the country through some of the most dynamic political years in its history. It is very possible that without his brilliance, the fledgling democracy may not have survived its first few trials by fire.

Benjamin Franklin was very popular and highly respected in the American colonies, England, and France. Franklin was highly intelligent and a very generous and compassionate person, who often woke up early and would ask himself what good he could accomplish that day.

After listening you will still not have every answer to every question you might want to know about the life of these four outstanding personalities; however, if you aspire to lead, whether in business or your community, this book is just what you need! Do not hesitate, order your copy now!

After seeing the musical, HAMILTON, I wanted to learn more about the relationships between Washington, Jefferson and Hamilton. I found this book and thought it would help. Not likely. The intro was so blatantly biased, I did research on THE HISTORY CHANNEL to see what experts thought of their accuracy and general presentations. Not Much. The telling remark was that The History Channel deals with historical events but they aren't particularly accurate. Don't waste your time.

The author used two diaries along with interviews and a research for a behind the scenes report which reads like an exciting novel. A powerful book that changed my mind about the heros of World War II and the intrigue of the worlds leaders at the time. Amazing how politics played their part in that war.

I am enjoying too much listening this book...and learning a lot, too. I recommend this book for all the people who want to know how leadership is about.

This book is extraordinary ! Very well listen !I really enjoyed it! I listen it all in one shot, because I found it so diverting. I am anxious to find more books by the same author. recommend !!

The author does a great service to his readers by explaining how the Constitution should be interpreted, i.e. as it was sold to the states for their ratification.