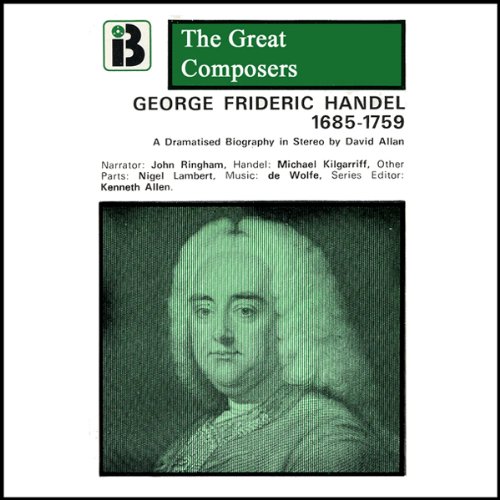 If all you’ve heard of George Frederic Handel is his glorious Messiah, sung out in churches everywhere at Christmas, give this audiobiography a try. Written by David Allen and narrated with British clarity and verve by character actor John Ringham, George Frederic Handel tells a very condensed story of the life of Bach’s contemporary and one of the founders of classical music as we know it.

German born, Handel’s long life took him on a European tour where he soaked up courtly Italian musical ideas. In time he moved to England and gave up court music for what some have called "moral music", usually chorale works written in England that are intended to move the audience toward heavenly considerations.

A portrait in words and music of one of the world's truly great composers. A man who gained fame in a land far from his birthplace. Handel was rewarded with glory and honour in his lifetime, and his music lives on in opera house, church and concert hall. His famous Largo is generally accepted as being one of the best loved melodies in the world. This programme follows his extraordinary success in a foreign land with respect and affection.
©1977 David Allen (P)1977 Ivan & Inge Berg