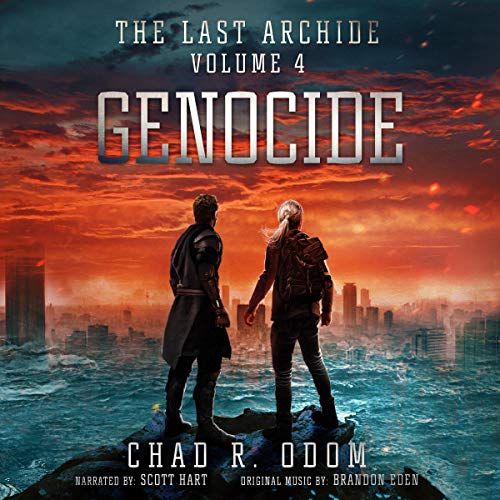 The secrets Armay never revealed are coming to light. Oryan now knows his father was an Arkon - a hunter of the terror known as Damrich. Damrich is making his final preparations to make his rule absolute. He only needs to remove the Archide threat, and the pieces are in place to bring the world to its knees.

Having been shown the depth of their wisdom and the scale of their struggle, Oryan must choose to aid the waning Archides, or live out his life in quiet retirement with Celeste and Asher. Celeste feels there is something sinister in the seeming altruistic Archide crusade. She will stop at nothing to assuage her fears and save her family.

Desperate times call for desperate measures. Both Damrich and Oryan will turn to old allies and new weapons in the ultimate high-stakes game of cat and mouse.

What listeners say about Genocide

Great series. Complex story, and characters. Scott Hart does a great job reading and keeping you envying the story.

Damrich's endgame is in sight. Only the remaining Archides and Oryan stand between him and world domination. Celeste's intuition is telling her there is a danger lurking undeath the utopian village the Archides have created and she is determined to uncover their secrets. The stakes have never been higher and with their lives at risk, time is running out.

This is a complicated, well-thought-out series and this book is no exception. Intrigue to the extreme. It doesn't always go as I want it to and this one hurts. I look forward to the final book. I can't even make a guess as to what the mind of Chad R Odom will think up.

Scott Hart gives this book life. I can't imagine it without his narration now. The music adds another level of drama and combined with his voice, it's easy to get swept away by this wonderfully complicated story.

Another amazing addition to the Archide series

I feel like this is where the story comes together. Everything the previous books have been building too starts to become clear. This series is so much larger than it at first appears. Great story ark. Can’t wait for the next one.