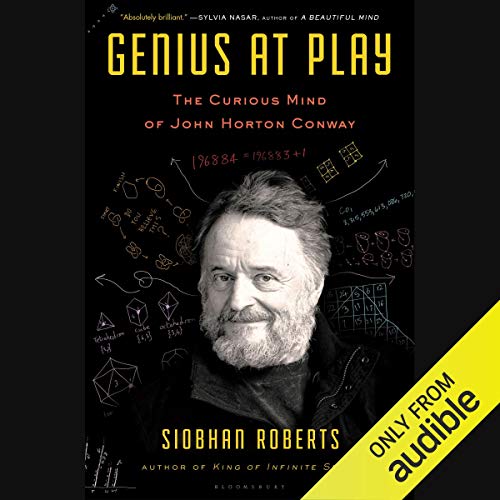 An unabashed original, John Horton Conway is Archimedes, Mick Jagger, Salvador Dali, and Richard Feynman all rolled into one - a singular mathematician with a rock star's charisma, a sly sense of humor, a polymath's promiscuous curiosity, and a burning desire to explain everything about the world to everyone in it. Born in Liverpool in 1937, Conway found fame as a barefoot Cambridge professor. He discovered the Conway groups in mathematical symmetry and invented the aptly named surreal numbers as well as the cult classic Game of Life - more than a cool fad, Life demonstrates how simplicity generates complexity, and the game provides an analogy for all mathematics and the entire universe. Moving to Princeton in 1987, as a mathemagician he deployed cards, ropes, dice, coat hangers, and even the odd Slinky as props to extend his winning imagination and share his mathy obsessions with signature contagion. He is a jet-setting ambassador at large for the beauties of all things mathematical.

Genius at Play is an intimate investigation into the mind of an endearing genius, laying bare Conway's personal and professional idiosyncrasies. The intimacy comes courtesy of the man himself. He generously granted Roberts full access, though not without the occasional grudge and grumble: "Oh hell," he'd say. "You're not going to put that in the book. Are you?"

What listeners say about Genius at Play

The book is written with great appreciation for Conway in spite of his serial philandering and absolute rejection of all responsibility for his personal affairs. Roberts covers Conway’s suicide attempt. Of course a book about a mathematician will have math in it.

He discovered the Conway groups in mathematical symmetry. His names is in group theory, game theory, knot theory, abstract algebra, geometry and his famous creation of Conway’s Game of Life, a set of rules for propagating a pattern that generates incredible complexity.

The book is well written and at times hilarious. Most of the information comes from the author’s interviews with Conway. Jennifer Van Dyck narrated the book. Van Dyck is a new narrator for me and I was impressed with her ability.

work, brain. Can you keep up?

Reminds me of my Dad. ...now I understand more about my father and his thinking. Very good to get your mind working.

This is an interesting book about a very interesting man. I have listened to it twice but my enjoyment of it is compromised by the narrator who whenever reading some thing Conway said - decided to give it a super over-the-top tone of bombast and hyperbole, literally every sentence from Conway is delivered in this way. I suspect the narrator (or the producer) does not know any professional scientists and unthinkingly adopts this cliche of a "larger than life" math professor, but it is annoying as hell. This is part of a general problem of scientists/mathematicians being represented by actors as eccentrics/oddballs and while (as one myself) this has a small kernel of truth - a quick search on youtube shows Conway was nothing like a "one note" as the narrator portrays - this was poor and lazy work and was "phoned in" by the narrator and it is great pity.

The author gives up in the end

Not well organized, not well written. The biography is more like a collection of gossips. But of course, Conway himself is fantastic.

Would you consider the audio edition of Genius at Play to be better than the print version?

For story telling elements I really enjoyed the audiobook (more so than the kindle version). This is because of the voice the narrator uses for Conway's part of the book is superb. For more mathematical aspects I prefer the kindle version as I can take my time to understand certain concepts that are hard to visualise.

What does Jennifer Van Dyck bring to the story that you wouldn’t experience if you had only read the book?

An enjoyable impression of Conway.

I didn't think I would but I did!

I really, enjoyed this book from start to finish. Unlike most biographies this wasn't 'dry' but lively and playful. So much so that I've just bought Conway's "On Numbers and Games" :)