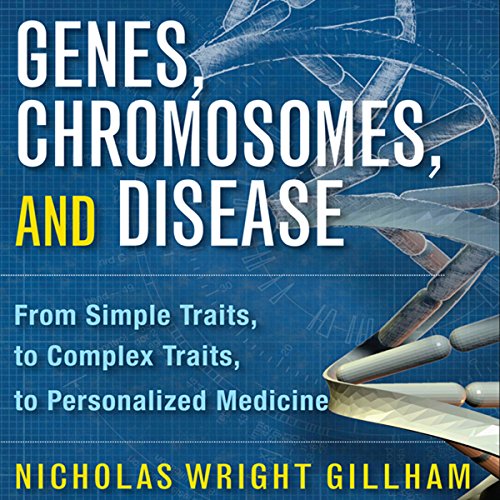 This listenable overview covers the rise of medical genetics through the past century, and the eugenic impulses it has inspired. Nicholas Gillham reviews the linkages between genes and disease, ethnic groups' differential susceptibility to genetic traits and disorders, personalized medicine, and crucial social and ethical issues arising from the field's progress. Includes:

What listeners say about Genes, Chromosomes, and Disease

I enjoyed this book very much

I can highly recommend this book to anybody interested into gene therapy and genetic diseases and the story behind it. I captivated me up to the very end.

Pretty good if you REALLY like the subject matter

What other book might you compare Genes, Chromosomes, and Disease to and why?

I have a great interest in books on biology and genetics, and this book held my attention mostly because of this personal interest. It's not as engaging, either the writing or the performance, as some of my true favorites: "Genome" by Matt Ridley, "The Emperor of All Maladies" by Siddhartha Mukherjee, "The Selfish Gene" by Richard Dawkins. I know the subject matter is slightly different, and this is decent science writing, it's just not GREAT science writing. The great ones compel you to keep reading on the topic because of their ability to explain what is truly fascinating about a complex subject in a manner which ignites your curiosity and imagination. I did enjoy this audiobook and finished it, but mostly to pass the time, not because I couldn't stop listening to it.

What aspect of Joe Barrett’s performance would you have changed?

Dry delivery, and lots of mispronunciation (over and over again). If you know the subject matter at all, it's so distracting to hear him repeatedly mispronounce the same words. Makes you wish he had read it ahead of time and consulted with someone on how to say the words right.

Would have been better halved

Gillham managed to include a fair amount of interesting (or at least useful) information, but he crammed it into reams of ridiculously unnecessary detail.

Maybe 15% of the book (give or take) was quite good. He discusses some interesting scientific and historical bits on the subject.

The remaining 15% was just an unbelievable waste of keystrokes which no person in the universe could possibly find useful, let alone interesting. It wasn't the detail of the science; I don't feel he went overboard there. It was the pointless attention given to things like what day of the week some 19th century conversation took place. From beginning to end, it felt like Gillham was being paid by the word and his number one goal was to maximize profits.

If I tried to edit details from this book into a relevant Wikipedia page, it would absolutely be rejected on grounds of pointlessness. Gillham's publisher should have applied the same exclusionary criteria to this book.

I'm not upset that I bought it, but I won't be buying books from this author in the future. I would equate it to concert attendance:

If I show up and the band plays an incredibly long set of extremely tedious songs, but works in a few catchy moments along the way, I'm not going to ask for a refund, but nor will I buy a ticket on their next tour. The world is a competitive place. There are other, better acts out there.

As for the narrator, he's just bad. At regular intervals, you'll hear him pronouncing practically every technical term incorrectly. For example: homogeneous, allele, SNPs, the names of specific hormones (e.g., aldosterone), etc. He doesn't know how to pronounce any of these. And "etc" isn't just one or two more. It's a lot. He seems to do especially poorly with words that include "gene" as a root word (e.g., genotype; confused on when the e is an ee and when it's an eh). My favorite: at 3:05:23 into the second half of the book, he very clearly pronounces the name of a bleeding disorder "homophilia." Very clearly.

All in all, the book is worth $5. If it goes on sale and you've already read some of the other, better works on the subject, go for it. The facts presented are solid, the writing is bad, and the narrating is worse, but you might be less disappointed than I was in the latter two.