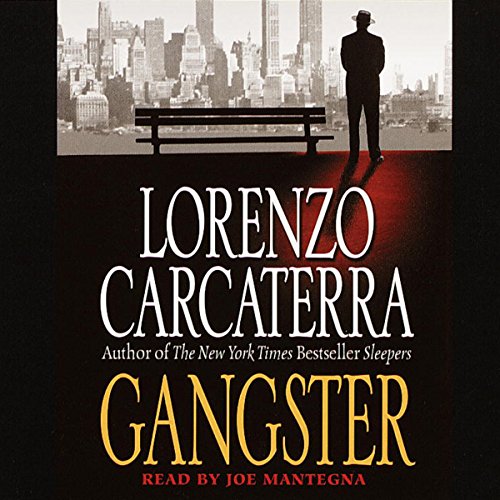 Love. Violence. Destiny. These powerful themes ricochet through Lorenzo Carcaterra's new novel like bullets from a machine gun. In Gangster, he surpasses even his best-selling Sleepers to create a brutal and brilliant American saga of murder, forgiveness, and redemption.

Born in the midst of tragedy and violence and raised in the shadow of a shocking secret, young Angelo Vestieri chooses to flee both his past and his father to seek a second family: the criminals who preside over early 20th-century New York. In his bloody rise from soldier to mob boss, he encounters ever more barbaric betrayals - in friendship, in his brutal business, in love - yet simultaneously comes to understand the meaning of loyalty, the virtue of relationships, and gains a perspective on the lonely, if powerful, life he has chosen.

As the years pass, as enemies are made and defeated, as wars are fought and won, the old don meets an abandoned boy who needs a parent as much as protection. By taking Gabe under his wing and teaching him everything he knows, Angelo Vestieri will learn, in the winter of his life, which is greater: his love for the boy he cherishes, or his need to be a gangster and to live by the savage rules he helped create.

A sweeping panoramic with riveting characters, a unique understanding of the underworld philosophy, and a relentless pace, Gangster travels through the time of godfathers and goodfellas to our own world of suburban Sopranos. But this is more than just an authentic chronicle of crime. Setting a new standard for this acclaimed author, Gangster is a compassionate portrait of one man's fight against his fate - and an unforgettable epic of a family, a city, a century.

What listeners say about Gangster

Thanks to the Yikes to you about it about it tomor

Read the book. Listened to the audiobook. And I still re-read it and listen to it again and again

This story is somewhat predictable, up until to the payoff at the end, which is a bit of a surprise. Mantegna's performance is first rate. I am looking for books that feature him!

we had a long drive from Oakland to Phoenix, this story kept us engaged for the entire journey.
the narration was well done (the stereotypes a little heavy, but given the subject matter....).
definitely easy listening

Loved this book. It brought tears to my eyes. The ending was a shocker. I highly recommend it. A great gangster drama that explores the full breadth of struggle, love and the human condition of a time in history.

this has always been one my favorites, it breaks my heart that it's never been adapted to screen but never the less I always come back to it. I truly love this one.

I liked this book. Sometimes it's good to read a nice moving story. This is a compliment. Moving story with good direction.

I really enjoyed this book and can't wait to read more of them. very captivating and thrilling.

Love, love, loved it! I did not want it to end! I can't wait for my next book by this author!

Started out well, but then it lacked brilliance

It's hard to measure up to Puzo's work. A boss living in an upstairs apartment or going to the cemetery without guards didn't quite cut it for me towards the end of part one. The parts involving Angelo's father are the most brilliant and Joe is always a pleasure to listen to. I stopped listening at the beginning of part two. Wasn't sold anymore.

Where does Gangster rank among all the audiobooks you’ve listened to so far?

This is one of my favourite books so I was quite excited to listen to the audio version as it's read by Joe "Fat Tony" Mantegna. His narration gave life to the characters and made me fall deeper into a story that I already love so much.

What other book might you compare Gangster to, and why?

I would recommend Gangster if you enjoy Mario Puzo or other Lorenzo Carcaterra books such as Sleepers, or if you have a bit of a strange fascination with gangsters as I do :-)

What does Joe Mantegna bring to the story that you wouldn’t experience if you had only read the book?

His narration is wonderful and perfectly draws you into gritty life of Angelo Vestieri. He is very talented and switches between the voices of the characters with ease. I must say that of all the audio books I have listened to so far his narration has been the best and most complementary to the story that is being read.

There is a lot going on in this book - betrayal, remorse, vengeance, redemption. At times it's brutal and gritty but also weaves in moments of dark comedy (via Pudge) and romance as Angelo builds relationships and has those bonds tested by the life he choses to live.

This really is a very enjoyable listen and I would love to see this made into a mini-series or a movie as it basically reads like one.

one of my favourite books of all time.

Its gripping from page one, an absolute must read.

So very basic and predictable

So badly written with a very predictable story plot. I would recommend this book for young teens,