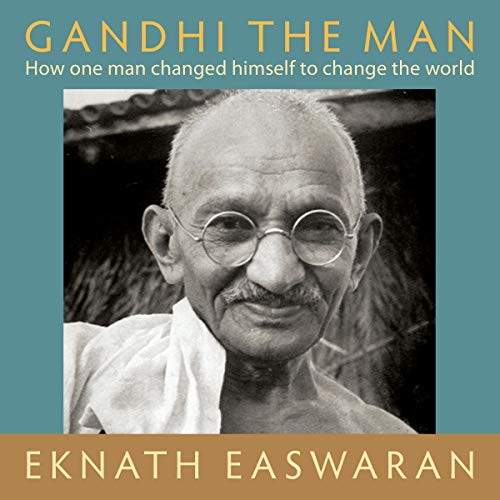 How One Man Changed Himself to Change the World
By: Eknath Easwaran
Narrated by: Paul Bazely
Length: 2 hrs and 15 mins
Categories: Biographies & Memoirs, Political Figures
5 out of 5 stars 5.0 (3 ratings)

This is the story of Gandhi's spiritual evolution - the turning points and choices that made him not just a great political leader but also a timeless icon of nonviolence.

Eknath Easwaran grew up in India and witnessed how Gandhi inspired people of all races, backgrounds, and religions to turn anger into compassion and hatred into love.

How had Gandhi transformed himself from an ineffective young lawyer into the Mahatma, the "great soul" who led 400 million ordinary men and women in their nonviolent struggle for independence? To find out, Easwaran visited Gandhi's ashram and watched the Mahatma absorbed in meditation on the Bhagavad Gita - the wellspring of Gandhi's spiritual strength.

Easwaran, a leading authority on the Bhagavad Gita and on spiritual living, explains the principles underlying Gandhi's nonviolence. He highlights how we can all use Gandhi's teachings to make our families, workplaces, and communities more peaceful in the world today.

This audiobook is a complete narration of Easwaran's Gandhi the Man but excludes the short Foreword, and the Afterword ("How Nonviolence Works") that are by other writers.

"Comes closer to giving some sense of how Gandhi saw his life than any other account I have read." (Bill McKibben, New York Post)

"Every few pages, the text is interspersed with something Gandhi said or wrote - I resonated with almost every quote.... You cannot deny the life and spirit of this man. It leaps out at you from every page. And so, in the end, it's a great book. Simply because of the strength of the man and his words, this book has an emotional/spiritual power that you can't help but notice." (NewPages.com)

"Its great contribution is its emphasis on the spiritual foundation of Gandhi's life journey." (The Nonviolent Activist)

Narration left a lot to be desired

I thought the narrator was mocking the accents of Indian people in general. I personally didn't think, there was any need for that accent.

This is to say that gandhi the man is an outstanding book I had hoped to read but audible made it super easy. Bravo.

We should all be like this loving man. He loved India so much all Hindu Seik andMusslim.

Prejudiced towards the Indian accent, the narrator has made a hash of his version of Gandhi's voice. It is jarring to hear him pronounce Indian words. It made me wince at all such utterances. Definitely a Thumbs Down for the narration.

loved it. truly inspiring. shows us how we can all be part of Gd's Will and Love

What does it mean to realy live and breathe in full harmony - ahimsa - non violence - and how this effect your actions and choices.
A very insightfull story about the power of true aligned integrity represented by Ghandi

Everyone should aspire to such a transformation. Meditation. Gandhi is a great role model. Renounce and enjoy 🙏

What did you love best about Gandhi the Man?

his strong will and compassion for human race

Gandhi, he is the centre of the transformation story

Which character – as performed by Paul Bazely – was your favorite?

Gandhi, Paul Bazely did a great job here, his voice and style fit the story perfectly

Paul Bazely is a great narrator, I wish there is allot of books narrated by him

Listening to how Gandhi lived his life and how he approached the issues of living gives me a great way to aspire to become a better person!

This book has moved to center stage in my life. I am 67 years old, practicing internal medicine and addiction medicine for over 36 years. I meditate on Chapter 3 of this book either when I am alone, or with my patients, at least three times daily. It contains the CURE for addictive illness.

I have enjoyed this book deeply and was moved by Gandhi’s example and life. It brought my own life into review and made me to ask the question, how can I love more, serve more, be more...?

Love this summarised version. And loved the impersonations as it brings out what he said.

Gandhi summed it all up as ‘renounce’ and ‘enjoy’ from the Gita.

Great intro for those seeking to understand Gandhi.