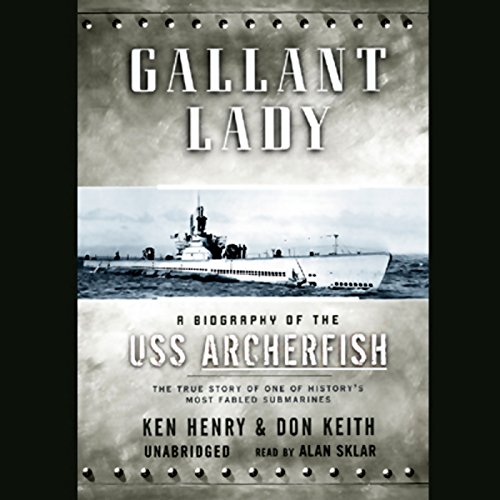 "I remember once as we sailed down Tokyo Bay with the homeward-bound pennant flying, I involuntarily patted her on the side and I swear she responded with a shudder from within. Archerfish, as I know her, and I know her well, is a fine woman. But I know her to be a great and gallant lady, and I shall always remember her just that way, the way she was." ¿Former Archerfish Commander Robert B. (Scotty) McComb

The Archerfish, a diesel powered Balao-class submarine crafted in the 1940s, won a unique, heroic place in military history and the memories of her crew members. Here is her story: from her assembly in New England and her dedication by Eleanor Roosevelt's personal secretary, to her service in World War II, where she broke the back of the Japanese Navy, and her critical role in the Cold War.

Here, too, is the story of her crew, who waited years to serve on the Archerfish. In their own words, these men tell how, against all odds, they sent a Japanese aircraft carrier to the ocean floor. Heroic actions, exotic ports, B-girls, perilous shore leaves, and the fascinating details of life aboard a sub, it's all here. An extraordinary real-life odyssey, Gallant Lady is a vivid, unforgettable portrait of a submariner's life.

"The next best thing to serving on the Archerfish is reading this book. It's a great Navy story about a great ship and crew." (Stephen Coonts)

What listeners say about Gallant Lady

Attention on deck. Gallant Lady is, alas, a waste of precious disk space and should be deep-sixed. Do not expect stealthy tordedo set-ups or classic convoy attacks. This is nothing more than an overblown travelogue of post-war gadding about to various ports of call on meaningless and largely inconsequential missions of.....what exactly are they accomplishing other than burning fuel and consuming alcohol, the world wonders? The only shots are being chased with beer. I was very disappointed and feel the promotional write-up to be misleading at best. Let Gallant Lady pass to port and engage your mind and heart with other worthy reads in this genre, such as "The Bravest Man" and, "Silent Running", both exceptionally well done war chronicles of intrepid submariners on historic battle patrols. Carry on.

Unless you served on this boat, don't waste your time reading this book! It is poorly written, combining meaningless minutia from the deck log (like the details of a post war wardroom inventory) and sophmoric tales of shore leave with equal reverence to the submarine's operations. The main focus of the book is drunken shore leave stories from the 1950's and 1960's. Narrator is overly dramatic on the minutia and mis-pronounces the names of ships, locations and equipment throughout. Listen to "Silent Running" and "The Bravest Man" if you are interested in well written books on life aboard WWII submarines.

In this books the authors were constantly trying to convince the listener how superior this ship and crew were. This being a completely unnecessary task since any sub and crew that made it through one, and in this case numerous, war paroles during WWII had nothing to prove to anybody. This was a good ship and crew and buy simply telling their wonderful story in a more down to earth and eloquent way would have made all the difference in the world. The authors also had the annoying trait of continually introducing, and I felt divulging, the crowning achievement of the Archerfish at the beginning the end and numerous times through out this story. The whole pace and composition was confusing and unbalanced which made it hard to listen to and follow. I must admit that I had read James Calvert's Silent Running and William Tuohy's The Bravest Man, two of the finest books about submarines I have had the pleasure to read, just before I started this book. They were a hard act to follow and this story just was not in the same class. The men of the Archerfish were indeed all hero's and their actions are noteworthy. They just need someone else to tell their story.

Would you listen to Gallant Lady again? Why?

I have listened to this twice! I would love to say her contributions to history and the amazing stories, but it really boils down to whiskey pancakes.

Would you listen to another book narrated by Alan Sklar?

Perhaps. His performance was hit and miss. I felt the whole time as if he were trying to sell me the ship.

You have to be a Navy geek

I understand the other negative reviews. This is pretty much a specialist book. If you're looking for high drama or character development you will be disappointed. But I found interesting all the details that bored everyone else. It's the little oddities and quirks of day-to-day life that bring alive exactly what it was like to be in the Navy as an average sailor or low raking officer.

Like Forest Gump or Zelig, Archerfish was there. Except this boat was really there and not pasted in after the fact. If, instead of her crew, the boat herself could only talk.

I couldn't finish listening to this book. The reader was fine, but the writing was bland and insipid...

Having read or listened to hundreds of military novels, this one certainly rates at the bottom of the list. Don't waste your time on this one. It really is more of a discredit to the "Archerfish" than a record of the "Gallant Lady" (never referred to in the book as a lady). Many more much more worthy books out there to spend your time on.

Not a casual listen

I?ve only given this book three stars which is below the average given by others.
There are several reasons for this. The narration is average. While Alan Sklar has an easy listening voice he rarely puts much expression or oomph into his reading. The story itself has several parts to it. The first four hours is about the building of the boat and the Second World War. It is easily the best part of the book. The stalking of the Shinano is gripping. But there are another ten hours to this book?. The middle section is made up of a large number of small incidental accounts spanning about fifteen years. While many are amusing the narrative does not flow well as there is no story line. It is hard to keep your attention and is dull in places. The last four hours of the book covers the two year world cruise that Archerfish undertook carrying out survey work. This section is a big improvement but once over the story looses its flow again. I could not recommend this to the casual reader as it very much for those interested in Naval History. If you are going to buy this book I would recommend that you fast forward over the Preface. It is not a Preface it is a pr?cis which gives away most the interesting facts leaving few surprises in the text. Ultimately I was glad when the book finished.

As someone interested in Naval history and particularly in submarine warfare, I was pleased to come across this book detailing the career of the USS Archerfish - a U.S navy submarine built during the second world war. Initially, I had expected this book to primarily focus on the Archerfish's war exploits as this was the main reason I purchased this title.

However, around a third of the way through Gallant Lady the stories of her efforts during the war were told and at that point I was somewhat disappointed. I had looked forward to really getting into more of the experiences and adventures of the Archerfish during the Pacific campaign waged by the U.S submarine force during world war II and felt slightly let down by the relatively little time spent telling this part of the story.

Thankfully, as you listen through the remainder of this book you will find - as did I - that the real value of this book is the telling of the much more interesting and colourful adventures of the officers and crew of this unique submarine. The war years were really just an introduction to the amusing, amazing and often heart warming tales of a tight nit brotherhood of men who took their work and their partying seriously! As you listen on, you will be taken on a long and winding journey through various exotic ports of call and all the stories that even a Hollywood director could not match for outrageousness and cunning. You really come to understand the sense of family that comes with serving aboard a submarine and how hard work, dedication and ingenuity all play a part in this epic tale of the lives of the many who served on Archerfish.

Above all, Gallant Lady is a human story and the book deftly introduces the reader to the many and varied rich personalities who's tales are told so well here. By the end of this book you have a genuine sense of feeling that you know these men in some small way and the experience is enriching.