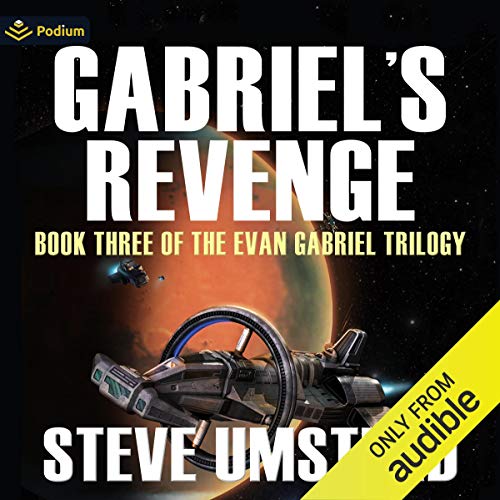 A missile has no conscience. It is an inanimate steel object: cold, emotionless. But once ignited, it burns white hot inside, and cannot be shut off. Fired in combat, it has but one objective: the total destruction of its intended target. And it will only stop when its objective has been achieved, or it runs out of fuel. Not all missiles are made of steel.

North American Federation Navy Commander Evan Gabriel thought it was over. Returning from a mission on the far-off world of Eden, he finds that Mars is in a state of political upheaval. Two major dome cities are now under the control of ambitious and ruthless men backed by the scheming South American Republic. Friends are in trouble, Renay Gesselli is missing, and the future of a world is in flux while rival governments bicker behind closed doors. From the ice-bound planet of Poliahu, to the dangerous jungle world of Eden, and back to his adopted home of Mars, Evan Gabriel has witnessed death follow him. Now, he's turning the tables, and no force would stand in his way.

What listeners say about Gabriel's Revenge

Where does Gabriel's Revenge rank among all the audiobooks you’ve listened to so far?

Evan Gabriel was a hard as nails, government sanctioned killer of all things evil who has to carry several metric tons of psychic baggage since he was about 2 1/2 years old. He had more ghosts stalking him than the total spooks who chased that shiftless peach fuzz Shaggy and his gangly mutt Scooby in three years of that show's episodes.

Evan will corpse up anyone who stands in his way, especially if it is one of those banditos from the SAR. When one of these soulless cucarachas had a reverse MENSA brainwave and told his cronies, "I know what will make Evan Gabriel crumble and throw in the towel, I'll kidnap the one person left in this solar system and local star cluster that Evan truly loves and cares for with all of his heart - his hot girlfriend. Yeah that will make him back down. Hey amigo, pass me some more of that crappy Chilean ripple heh, heh, heh," If there is a better example of famous last words that ends up biting your ass and entire lower torso off I have not heard it.

Didn't the guy who uttered this nonsense remember what happened two weeks ago on Planet Armpit, or something to that effect, when Evan and the surviving half dozen of his merry band of merciless unrelenting space avengers ground into a mushy paste each one of the 82 assorted mercenaries, 60 Asian ninja wannabes and 39 innocent bystanders too slow to scramble away from the fusillade of bullets and pulse laser beams? And that was for some Mars-based washed up politician's son who really never entered the story in any meaningful way. Yeah, idiot, grab Evan's girlfriend, he won't get pissed.

Evan is about to get a new hole in the back of his head by the head mercenary guy but his "brain buddy" pulls an ace out of its virtual sleeve and ends that nonsense. The next thing you hear is a wet pop and BING! we now have a headless mercenary guy.

Evan Gabriel will hunt you down and destroy you along with everything you love and cherish if you don't immediately line up at this theatre and buy a ticket for his movie. And yes, there is a red light beam zeroed on your sternum. Make your decision.

Ray Chase is the right guy for this genre. He has a lyrical and - it is hard to put in words - a way of narration that makes scenes a trip to listen to. For example, every time that space ship captain friend of Evan speaks, his voice is just a tad on the pompous or unabashed self important side, which I dig. Ray Chase does this kind of thing in many of his narrations, usually for a character in some kind of leadership position. Every time I hear that tone of voice I either start laughing or crack a smile. I like that kind of narrative style because it keeps the storyline light while not taking away from the overall mood. And don't we all need a little dollop of lightness in our day?

Too many audiobooks these days are way too heavy and dark with some crappy two-bit kingdom lousy with shiftless wizards who have absolutely nothing else to do but come up with new ways of fucking with people who just want to be left alone so they can get that stuff they need and go home and eat. All I have to say to the wizard community at large is "Hey losers, why don't you get a job, get a life and get the hell out of my world! Oh, and before you go, get yourself a new dress. That mu mu or whatever you got on stinks like crap and makes you look like an emaciated grief chick. And please brush your remaining 5 teeth. Your breathe is ...... you get the point."

I am sick of wading through the thousands of redundant "Crown of the Zogflith" or 'Swordmen of the Blagghespl" type audiobooks. They bring down the general tone.

All that genre that should be left to the people who really deserve that kind of morbid tripe - 103 pound brace faced D and D players, pizza faced puss bags and the chronically virginal who look like that guy who runs the comic book store in "'The Simpsons". Now, I shall make like my pants and split!

Sad to see it end but great story...hopefuly there is a spin off or sonething else...loved the story

The narrator was easy to listen to. the story was great! Just the right speed.

This series was amazing! I mean truly truly amazing! I love the way the author ended the story. He wrapped up all the loose ends and finally gave peace & closure to a very weary warrior. Evan has to dig deep and trust in his friends and his team. Then he has to be strong enough to go it alone for the woman he loves. And the way he went all Jedi Robocop on the Asian guy was pure perfection. I would recommend this series to any and everyone, it was awesome!

This is the last book in the series and if you read the last one you can pretty much have to get this one because this is the end and it has a really good ending.

I mentioned in previous reviews the narrator isnt the best and I am still not used to him now so that is a warning to anyone reading this review who hasnt started the series but the story is pretty good here so give the free prequel a try, if its still free and go from there.

The way this plays out is great and not how I expected including the ending but its great, I dont know what could be said here since there is a free prequel you can probably just get that and see how it is, if you like that then you will be good with the rest

Would you consider the audio edition of Gabriel's Revenge to be better than the print version?

Have you listened to any of Ray Chase’s other performances? How does this one compare?

Have not listened to any othet

This was an excellent trilogy with some gripping action packed chapters.