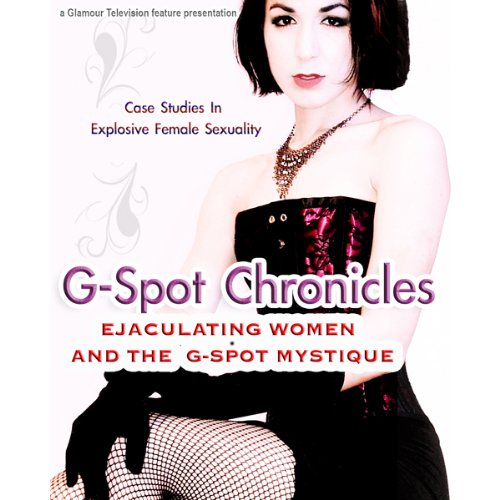 This documentary project challenges recent claims by the British research scientists of King’s College, London. The Consortium of Ejaculating Women featured in this program controverts the British scientists’ conclusion (in 2009) that “the G-Spot [is a] myth.” In 2009 the researchers had declared, after a topical inquiry, that the phenomenon was a fantasy of the female imagination. But in 2010, a group of French doctors called the study medical machismo.

"This exceptionally produced work presents information about female ejaculation, a normal variation in female sexual response that every woman and her partner should know about." (Howard J. Ruppel, MPH, Ph.D., DACS Chancellor and Academic Dean, Institute for Advanced Study of Human Sexuality)
"A sweet, sensual, and very sexy portrayal of female ejaculation and the women who love to do it." (Annie Sprinkle, Ph.D., author of Spectacular Sex)

What listeners say about G-Spot Chronicles: Ejaculating Women and the G-Spot Mystique

Makes you want to hear moreeeeee!

Super stories, and interviews, the voices where nice and soothing, all in all, it leaves you hungry for more information!

There was a lot of repeating by the different presenters. A wider variety of information & viewpoints would have been better than repeating the same material.

Has G-Spot Chronicles: Ejaculating Women and the G-Spot Mystique turned you off from other books in this genre?

No. I'll keep researching for myself.

Did G-Spot Chronicles: Ejaculating Women and the G-Spot Mystique inspire you to do anything?

Examine my thoughts & beliefs related to the subject matter.

Encouraging women that ejaculation can be learned is wonderful, but doesn't address women that weren't seeking the experience our trying to learn it. There is no voice for women that aren't sure they want this or aren't completely excited & enthusiastic about the prospect.