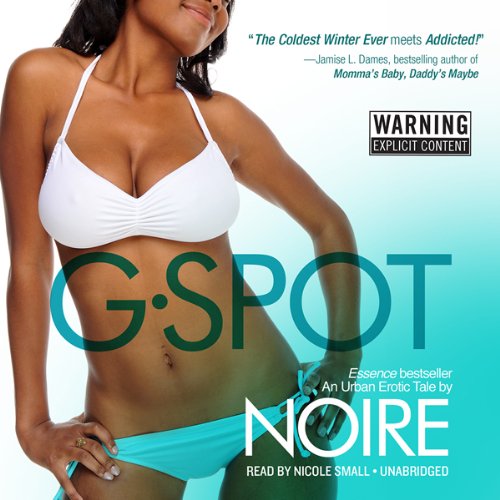 By: Noire
Narrated by: Nicole Small

Her man demanded loyalty, but her body wouldn’t obey.

"Have you ever rolled over in the middle of the night and realized you were doing things you swore you'd never do? Sexing brothers you vowed you'd never touch? Bending backwards and stooping lower than you ever thought you'd stoop? Well if you can feel me even a little bit, then let me hit you with a story that just might blow your mind…."

Nineteen-year-old Juicy Stanfield is the sexy young girlfriend of Granite "G" McKay, owner of Harlem's notorious G-Spot Social Club. A drug dealer with a lethal streak, he runs Harlem with an iron fist. But even the cash and the bling can't keep Juicy from getting restless, and while G fulfills her every material desire, she's burning up with unrequited sexual energy. To cheat on him would be a death sentence, so Juicy finds pleasure in secret ways: fantasizing on crowded subways or allowing her eyes to hungrily take in the male dancers on the club's ladies’ night.

But as Juicy's cravings grow stronger, one thing becomes frighteningly clear: She's a virtual prisoner in G's dangerous world. As G begins to suspect her of playing him, he pulls the reins he keeps on her even tighter. If she's ever to escape and get a life of her own, she must find a way to start stashing away some of G's cash. But doing that under his watchful eye is a challenge she might not live up to - especially when her appetite tempts her with the deadliest desire of all: G's own son.

What listeners say about G-Spot

I love noire she is a lyrical author who weaves tales so explicit that her name is branded in the words. I love how Nicole Small's narrates this tale that noire spits. Juicy is the character in this story and you won't forget the way she is betrayed as a young naive lady that is picked by one of the biggest players in the game this detail makes her story a classic. The life she lives thereafter, will have you trapped by the words and wanting to know what will happen next. Noire is a very RAW uncut author who paints pictures by her words. This book is for more experienced readers who can handle the street aspect and for people un afraid of explcit content because there is definately a lot of RAW material in these words. I have read other Noire books like Candylicker and thugalicious and I think this is my fave thus far. Enjoy this reader and let it take you back into your mind so you can picture this story as a movie.

OMG the emotionalRide of my life

I am a Zane fanatic but omg this book took me for a. Emotional ride tears laughter and utter fear!! I felt I was there watching it all go down! Nicole small is no joke with her story telling she brings this to LIFE!!! A must for book lovers!

Overall and Story are a 3.75.
Juicy, G, Gino & Jimmy. This story tells the story of family, a young college woman’s quest for freedom, and the consequences paid when our choices are limited by our circumstances but we disregard it out of desperation for freedom and, ultimately, for love, love of self, first, and love of family. This story is also a thriller created through the aforementioned circumstances that bound Juicy, the heroine of the story, with her lover and jailer, G.
There is really no hero in the story, though Juicy’s brother, Jimmy, and G’s son, Gino, both engage in some heroic acts along with non-heroic acts. But they too were limited by circumstances.
This story is a reminder for the naïve and the simple-minded and mentally-blind-by-choice folk who start any sentence off with “All you have to do is” when they’re talking about choices someone SHOULD make to improve their lives. If your life has been so, then you are one of the few and very fortunate. And you have no idea, absolutely none, about what life is like when desperation and circumstances are the primary factors in any choice. For most people, circumstances limit our choices leaving the only options as “a rock” and “a hard place. Thanks for the reminder.
Yes, there’s sex in the story, but it’s a parallel aspect that runs alongside the thriller aspect and Juicy’s quest for freedom. Part of her freedom quest has to do with freedom to have her body treated in a way she chooses ONLY out of desire and what’s best for her and not because she is trying to survive and keep her brother safe. Thankfully, this is not a story that’s really all about sex with little bits of story thrown in just to call it a story. The sex had purpose and was not the focus of this story. It was also nice that, eventually in the story, there was a romance aspect. That was a nice surprise. Is there a HEA? You have to listen to find out.

If you could sum up G-Spot in three words, what would they be?

I was happy and sad.

Have you listened to any of Nicole Small’s other performances before? How does this one compare?

Yes, I've heard her perform other Noire books. I always thought she did a good job, and this book was no different. She plays the men well, yet her voice fits these characters that are supposed to be so beautiful perfectly.

I didn't cry, but I was saddened my a few scenes.

Good book overall. Between Hittin the bricks and this one, it's hard to decide which is best of the books I've read so far.

Where does G-Spot rank among all the audiobooks you’ve listened to so far?

I don't normally bother to write reviews but this book was better than I ever expected it to be!

I loved everything about this story. I felt for the main character the most. I don't want to say to much, I dont want to spoil it for you. But the book is non stop!

What does Nicole Small bring to the story that you wouldn’t experience if you just read the book?

I found myself looking for small moments to listen more

I am at work and typing fast. Please excuse my spelling errors! ENJOY!!

I couldn't enjoy any of this story. I feared for her life so the sex was so back stage that I didn't even finish the book.

This book! LAWD'a'mercy! If that daggon Juicy wasn't making my pressure go up, that daggon G was giving me nightmares! There were parts that I liked, but many more parts that frustrated me. All to come to the most unbelievable and unlikely fairytale ending ever. Without spoiling it for those who want to give it a chance, I will say that the author did the lead female character a disservice by allowing her to go through pure hell only to have the ending end up without no reference of making sure she did not have an incurable disease or psychological damage... Just rode off into the sunset line she just didn't go through all of that. Like I said.. I wanted to like it... BUT.

I had to take a blood pressure pill on this book.

This story line was very good but It was just to graphic for me. I could not handle how they raped and beat Juicy throughout the story. My heart ached for her freedom and safety. which in retrospect is probably what you wanted feom your readers. I'm glad she finally had a happy ending dispute the train that ran in her. That was a bit much for me. Too much.

It wasn't terrible but not all that. Definitely a one time read please believe me.