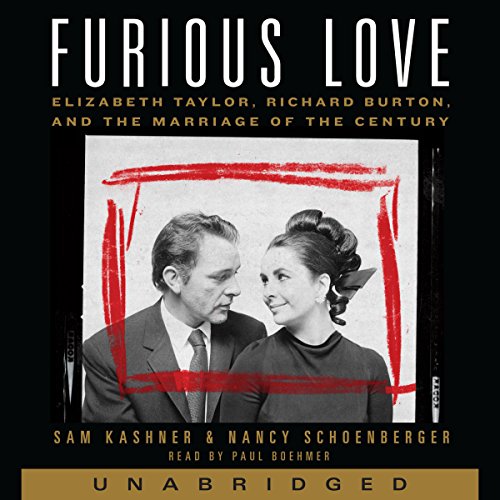 The definitive story of Hollywood's most famous couple.

He was a tough-guy Welshman softened by the affections of a breathtakingly beautiful woman; she was a modern-day Cleopatra madly in love with her own Mark Antony. For nearly a quarter of a century, Elizabeth Taylor and Richard Burton were Hollywood royalty, and their fiery romance - often called "the marriage of the century" - was the most notorious, publicized, and celebrated love affair of its day.

For the first time, Vanity Fair contributing editor Sam Kashner and acclaimed biographer Nancy Schoenberger tell the complete story of this larger-than-life couple, showing how their romance and two marriages commanded the attention of the world. And for the first time, in exclusive access given to the authors, Elizabeth Taylor herself gives never-revealed details and firsthand accounts of her life with Burton.

Drawing upon brand-new information and interviews and on Burton's private, passionate, and heartbreaking letters to Taylor, Furious Love sheds new light on the movies, the sex, the scandal, the fame, the brawls, the booze, the bitter separations, and, of course, the fabled jewels. It offers an intimate glimpse into Elizabeth and Richard's privileged world and their elite circle of friends, among them Princess Grace, Montgomery Clift, the Duke and Duchess of Windsor, Peter O'Toole, Michael Caine, Marlon Brando, Rex Harrison, Mike Nichols, Laurence Olivier, Robert Kennedy, Tennessee Williams, Noel Coward, John Huston, Ava Gardner, the Rothschilds, Maria Callas, and Aristotle Onassis. It provides an entertaining, eye-opening look at their films, their wildly lucrative reign in Europe and in Hollywood, and the price they paid for their extravagant lives.

What listeners say about Furious Love

What disappointed you about Furious Love?

Audible only lets you hear the opening lines of the front page and author's information - you are not hearing the book, well I bought it, and it is horrible. Audible certainly did not bother to check what excerpt they are letting people sampling - just unprofessional ! Sorry I did.

Rarely am I dsappointed in a book AND the narrator (in this case Paul Boehmer).

The context of the book is only a step up - if that - from stuff we've read in 'D List' tabloids.

Paul Boehmer sounds like an inexperienced narrator (at least in delivering documentary) who is reading this book as practice. Perhaps with a few more tries he could have managed to get the job done well. He pays little or no regard to accentuating a quoted piece of text so that I could decipher that it's different from the rest. His tone of voice fluctuates at all the wrong times -leading me to believe something's going to be said, when indeed, he's already said it. This results in me feeling like I wasn't listening or paying close enough attention. But, alas, that is not the case. He's simply doing a poor job. I don't think I'll be able to listen to this book to its finish.

A great tale about passion and glamour.

Did Paul Boehmer do a good job differentiating all the characters? How?

The book is the one you want to be as quickly as possible to be continued once you have put it aside. It is a good pastime, relaxing and entertaining. Could have had a stronger analysis of the characters but it may have reduce its enjoyment.

Where does Furious Love rank among all the audiobooks you’ve listened to so far?

This is a fabulous read; I have the book itself. It is not to be missed.

The always timely story of two people who loved each other, sometimes "too much," in Elizabeth's words.

He doesn't know how to pronounce words (i.e., Richard's birthplace (Pontrhydyfen), at one point he says that Elizabeth punched Richard in the "soldier," which I know is not correct, etc.), his version of Elizabeth's voice is awful and grating. Most of the women's "voices" are bad.

I was SO excited about this book, but the little voices that Boehmer does for Burton and Taylor are so offensively bad.... he makes Taylor out as a whiny school girl and Burton (whose voice and wit are arguably his best traits) as weak and soulless. Burton's words (ever the poet) are mangled and rhythmless in Boehmer's rendering.

Unfortunately the sample isn't a sample of the book, but of the opening credits- otherwise I could have avoided this unfortunate purchase.

I loved this book. I might have taken it just as tabloid except for the effective narration. Paul Boehmer manages to "be" both Elizabeth and Richard without resorting to annoying voices. I was particularly struck with the power that Richard had with language which comes through in his letters and the delivery with a deeper voice and a lovely accent.

One of the greatest love stories of our time

I have read most everything available on Liz and Dick, but this takes the reader right into the midst of the passion and tempest of a great love story. Love letters from Richard Burton to Elizabeth Taylor detail the agonizing bliss of their relationship, and explain why it ended all too soon. A great read!

I have been a "Liz and Dick" fan since the 60's. This book captures the intense fascination the media and public had for the Burtons. Part trashy, part tabloid, and part biography, this book does a wonderful job of giving us that glimpse of behind the scene details that still continues to titillate us in the 21st century. Paul Boehmer does an excellent job with the narrative, providing the reader with delightfully rich inflections and authentic English and Welsh accents .. at times actually sounding like Richard Burton. A must read for old Hollywood fans !

What a tragic love story.

Couldn't stop listening to this! What a tale of glamour, addiction, talent, ego, excess and passion. If it were fiction, no one would believe this story to be true. Such a pity they were never able to conquer their demons at the same time to make a go of it.

The narrator took me a little while to warm up to, but then I liked him a lot. Subtle, good accents. It was wonderful hearing the letters that Richard wrote to Elizabeth, some of them even written when she was in the same room or suite. Enjoyed it.

I enjoyed the narration. I thought Paul Boehmer did a great job with Burton's voice, Few male narrators can do women's voices well, and his Elizabeth Taylor was not good. But I also thought he captured Sir John Gielgud's voice as well as Michael York's. It was a fun listen, and his voices made it even more enjoyable.

I remember the Liz and Dick headlines from the mid-sixties until his death, and I enjoyed the details shared in this book, particularly Burton's letters.

A Must Read for All Fans of Hollywoodland

Don't make the mistake of thinking "Oh I know all there is to know about the Liz & Dick Saga". This book is packed full of new information - a lot of it first hand from Elizabeth Taylor herself. The reader is carried along into their world of love, tantrums and turmoil. It definitely is the sort of book that you hate to finish reading. Not just for the romantics among us, this will appeal to all fans of Hollywood, brimming with little gems and laugh out loud moments at some of the ridiculousness yet loveability of those who live the golden life. Theirs indeed was a furious love.

Takes me back... y could not

I found myself nearly crying at the end of this book,I really do think that Elizabeth and Richard were the loves of their lives,it was only when they became liz and Dick that the mayhem took over drinking sent Burton into an early grave,but that had started before he met Elizabegh Taylor and they at times torchered each other,but still they could not live with each other and could not without each other..but an enduring for better or for worse love.

A page Turner from the word go. A sublime audio book that takes you back in time when film stars were true icons.

Second time I've listended to this book and I loved the detail and content. I hated the reader. he has no understanding of either phrasing or corect pronunciation. He reads each phrase as if it is a complete sentence.

The man cannot pronounce fairly standard French sayings, and his attempt at Welsh names is awful ( I know they are difficult) but he could have been taught how to say these words correctly. He seems not to understand that a comma is not a full stop, so every phrase has the wrong downward inflection.

Could you see Furious Love being made into a movie or a TV series? Who would the stars be?

Yes, but who could play these people?!