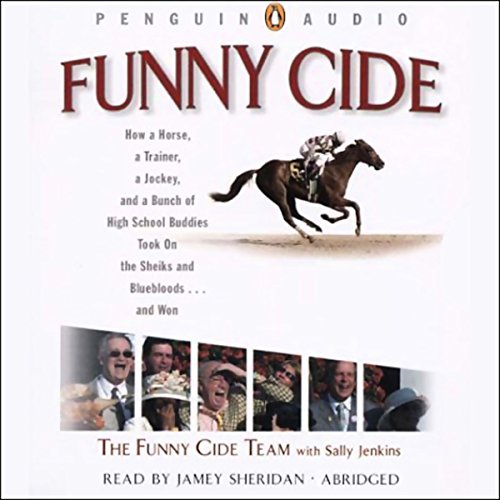 They had no business being there. They were up against million-dollar horses owned by patricians, oilmen, Arab sheiks, and Hollywood producers. They were 10 regular guys, and all they wanted was to win a race. Instead, they won the hearts of America.

In 2003, a three-year-old with the unlikely name of Funny Cide became "the people's horse", the unheralded New York-bred gelding who, in a time of war and economic jitters, inspired a nation by knocking off the champions and their millionaire owners and sweeping to the brink of the Triple Crown.

Trained by a journeyman who'd spent over 30 years looking for "the one", ridden by a jockey fighting to come back after years of injuries and hard knocks, and owned by a band of high school buddies from Sackets Harbor, N.Y., Funny Cide became a hero and media sensation.

Now, Sally Jenkins, award-winning co-author of Lance Armstrong's #1 best seller It's Not About the Bike, tells the inside story of the Funny Cide team's ups and downs against overwhelming odds, illness, and even scandal, to capture the imagination of millions. It's a new American classic for the underdog in all of us.

"A classic long-odds story that is hard to resist. Funny Cide captures this spirit well making it an enjoyable read from start to finish." (Amazon.com)
"A sprightly and entertaining tale of a lovable winner from nowhere." (Publishers Weekly)

What listeners say about Funny Cide

I fell in love with this horse the first time I read this book. Now I have read it abort 5 times now and listened to it once and I still think he is my favorite horse. So as you can tell you will not be sorry that you either read or listen to it being read. Thanks for bringing it to audible.

i loved this a.book, it gives such a good insight into the racing world. gives acurate facts and statistics of racing. i personally think the book goes a little overboard on the background of the people... cuz there are 10 of them. but i guess it's essential to the story. i agree with the post above if you like seabiscuit, you'll like this one. and the narrator is pretty good too.

This is a heartwarming story about an underdog racehorse. The author thankfully stays away from much of the history of the owners (other than to introduce you to them), & concentrates on those who deal with the horse day to day.
The story is about his training, races up to the Triple Crown. It ends there, which is why I only gave it 4 stars. I wish the book would have talked about what is still going on with the horse now. Readers of Seabiscuit will like this book.

The writer gives you a platform to visualize the relationships and the excitement of the Triple Crown. Great audiobook!!!

I learned a lot!

I thought I knew the whole Funny Cide story. Turns out, I didn’t know ANY of the really good stuff. Very enjoyable.

A book you can read/hear again and again.

One of my new favorite underdog stories. Everytime I listen to this book it gets me excited about being a Thoroughbred breeder and owner. A must for anyone in the biz.

Loved it. Funny Cide, the middle class hero. A book about horse racing that I can relate to.