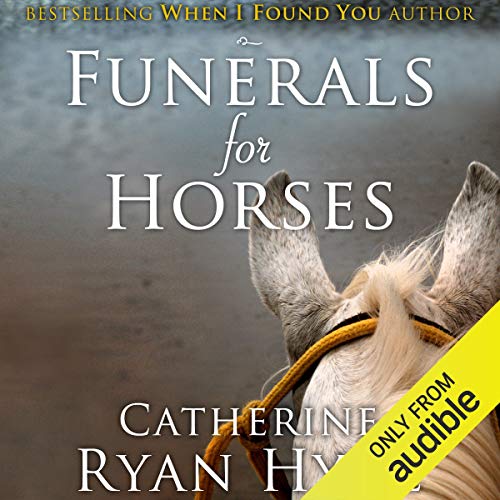 Funerals for Horses, Catherine Ryan Hyde's critically acclaimed first novel (initially published in 1997), is a deeply felt and heartrending story of redemption and love, disappearance and faithfulness, by the author who would go on to be known for the best-selling Don't Let Me Go and Pay It Forward.

Ella Ginsberg's brother, Simon, has disappeared. His clothing, shoes, and watch were found abandoned near a freight line track in Central California. His jockey shorts and wallet were never found. The police have no clue, and Simon's wife had no warning that anything was wrong.

Ella takes off on foot across much of California and Arizona, thinking she can find Simon using nothing but her knowledge of the way he might think. Her search leads her to the Navajo Nation in Arizona, where she is helped and befriended by three Native Americans and an aged paint horse named Yozzie.

Ella has serious mental health issues, and Simon, who raised her, is still the most important person in her shaky world. Only maybe it's not as unstable as it looks from the outside. Maybe inside Ella a core of unexpected strength is emerging. Maybe Ella is even stronger than the brother who held her family's lives together for so long.

"A tale of sibling loyalty, madness, pain and redemption. In this restrained but compelling narrative, Hyde movingly conveys the toll of years of emotional damage." ( Publishers Weekly)

I tried to listen to this book because I had already paid for it, but finally decided I couldn’t finish it. The sexual descriptions were disgusting.

I felt this was a confusing book. It was difficult to follow Ella"s mental illness.

Would you ever listen to anything by Catherine Ryan Hyde again?

Oh Yes!! I love all her other books!!! I think she is a great writer.

This is not one of my favorite stories by this author. I had a bit of trouble trying to figure out just what the plot was. It seemed a confusing story about sad, confused characters trying to find meaning in their lives.

This book is not my style, I tried it to explore new authors. The authors writing style wasn't bad, I just didn't enjoy the storyline.

I have read many of Catherine Ryan Hyde's books. I have not been upset with any of her books up until this one. While she has written many, I have either learned something at the end but this one let me down. The story itself was a good read but the ending was disappointing! I will still read her books but I will pray for the ending to not be a dud!

I do not know how Ms. Hyde writes these deep, thought provoking books. Her simple use of words like "perched" gives instant meaning to a situation where the characters are being careful, yet in a position where they could run away instantly. This book is about a young girl searching to find her real self. She has a mental loss not of her own making. I always love anything to do with horses, so I appreciate the presentation of how horses and their own spiritual beings come into her life. A definite read. The narrator is amazing.

Loved it! Worth 10 stars! At least! If you've completed one of her books already, no one needs to sell it to you. If you haven't tried one yet, do yourself a favor. Many are even free and several of them you can add audio for $1.99. The best deal on Amazon...

I can say how well-written this book is, or how the author seems to perfectly understand & express the many paths of mental illness. Instead, I'll just ask this: Katherine Ryan Hyde, why am I usually a sobbing heap when I get to the end of your books?

This was different from Catherine’s other books . I can’t say I loved it , however it is very deep. The attention to detail was amazing.
Sometimes it was hard to continue ! Must have an open mind.
I’m glad I read it, just a little out of my genre

I have previously loved the author's books.
I think she has lost all perspective with this one. Very confusing story, graphic disgusting perverse sexual subject matter and inappropriate for an audience, which trusted her judgement.