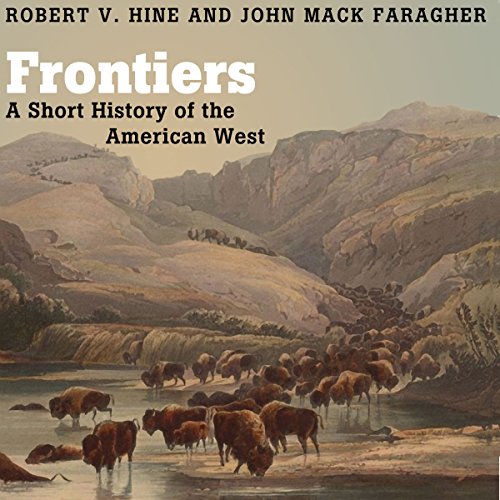 Published in 2000 to critical acclaim, The American West: A New Interpretive History quickly became the standard in college history courses. Now Robert V. Hine and John Mack Faragher offer a concise edition of their classic, freshly updated. Lauded for their lively and elegant writing, the authors provide a grand survey of the colorful history of the American West, from the first contacts between Native Americans and Europeans to the beginning of the 21st century.

Frontiers introduces the diverse peoples and cultures of the American West and explores how men and women of different ethnic groups were affected when they met, mingled, and often clashed. Hine and Faragher present the complexities of the American West - as frontier and region, real and imagined, old and new. Showcasing the distinctive voices and experiences of frontier characters, they explore topics ranging from early exploration to modern environmentalism, drawing expansively from a wide range of sources. This book will be treasured by every listener with an interest in the unique saga of the American West.

"Smart, lively, and lucid, this book takes a sweeping, expansive view of the American West, offering anyone a fine point of departure for exploring the many paths into the past." (Gregory Nobles, author of American Frontiers: Cultural Encounters and Continental Conquest)
"A concise history of the American frontier West written by two of its foremost historians, paying special attention to the impacts on and relations among diverse races and cultures, including women's roles and perspectives." ( Library Journal)

What listeners say about Frontiers

This book is incredible and sad. It's our history, our triumphs, and our failures. It is however well worth the money and time. Couldn't recommend it enough.

A Good Survey of Western Expansion

This book is a great starting point to study western American history. The authors point out the origins of trends that are relevant in the 21st century. It reads fast and presents topics that invite further exploration such as Native American, and railroad history.

the narrator is so bad I could not listen to it

I was dying to hear this great history lesson of our west.
Until I turned it on!
The narrator was so bad I turned it off after five minutes.I deleted it .