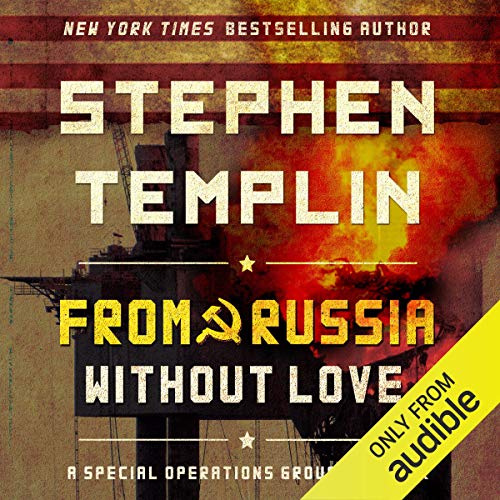 From Russia Without Love

From Russia Without Love

SEAL Team Six veteran Chris Paladin left the Navy to become a pastor, but CIA spook Hannah Andrade pulls him back into Special Operations Group to locate the White House Chief of Staff's kidnapped son-in-law before he is executed by Greek terrorists. Cantankerous Army Delta Force operator Sonny Cohen reunites with Chris and Hannah as they race the clock to save the hostage.

In Athens, Chris and his teammates discover that Russia is secretly behind the kidnapping, part of a murderous plan to attack the flow of natural gas in Europe. The Cold War has heated up again.

Chris and his crew's rescue quickly changes into a mission to capture or kill a Russian spy.

Great continuation to the series! Can't wait to see what surprises the author has up his sleeve.

Would you consider the audio edition of From Russia Without Love to be better than the print version?

I have not read the paper book version but I did really enjoy the audible version.

This story had so much to offer the reader. I enjoyed the depth of all the characters. Sonny's character was a comical relief to ease the tension of all the excitement throughout the book. Chris Paladins character brought some reality this read. A former navy seal turned pastor who has a dual "personality". Being a former elite operator and now a pastor you hear his struggles of his current life imposing on his old ways of a highly trained Navy seal. All the characters through the novel developed extremely well.

Have you listened to any of Brian Troxell’s other performances before? How does this one compare?

Yes I have listened to Tridents first gleaming and The life and legend of Chris Kyle.

I would have loved to but unfortunately not able to.

I am mainly a non fiction reader but I have enjoyed both of Stephen Templins novels.
Looking forward to see what he comes out with next.

This was the first time for any Templin product. I'm very impressed with the story. The pace, action, and ideas. Highly recommended this book. The voices are done with amazing use for the story.

Really well written. Hooked from the first chapter! Can't wait to start the next one!

It is kind of intriguing to have a minister go on spec-ops field trips as it allows the character to muse over what this sort of activity does to one's psyche or soul. It allows him to not kill in anger, and to be very careful about innocents. I guess it works.

What didn't work so well was the juvenile conversations and immature personality of the minister. He has an adolescent attraction to a beautiful woman who just happens to be the daughter of the #1 bad guy so he lets his guard down. When she eventually pulls a gun from under her skirt (didn't see that one coming, yeah right) he then describes her as "untrustworthy." That was a laughable line. I actually did laugh, and shake my head.

The actual take-down of said #1 bad guy was another head shaker. First our guy tracks him to a lonely cabin where an axe is seen on a chopping block. Our guy comments that this "really was a weapon of opportunity" but he doesn't take it! How stupid was he? Of course the bad guy does take it, but the axe is not the final weapon used. This ending could work out in real life I suppose, if the good guy is really, really lucky, but we usually expect our elite soldiers to win through skill and toughness. As a literary device, this scene didn't satisfy. This volume has ended my interest in the series.

Where does From Russia Without Love rank among all the audiobooks you’ve listened to so far?

I loved listening to this book! I was only going to listen to a little bit the first night and just couldn't stop listening! I could never find the right moment to turn it off.

Boring.... save your credit

Boring and monotonous. The characters were just not very interesting. And the New York queens accent of one of the characters got really old after a while.

Almost, but not quite!

This tries really hard to be in the same league as Clancy, Flynn, et al, but it really isn't!

It's made more implausible by the fact that the main character is supposedly a Pastor! He allows himself to be put in a situation where he ends up killing more people than the other members of his team, and rushes off to do more superman stuff than Superman!

Add to that, the whole gunfight at the OK corale scene in the heart of London, further stretches credibility, especially worrying if it's a true indication of how little American 'Operatives' respect fellow 'allies' country and rules!

I was intrigued by the synopsis of a Spy Operative who is a Pastor but, the whole premise was thoroughly underwhelming!