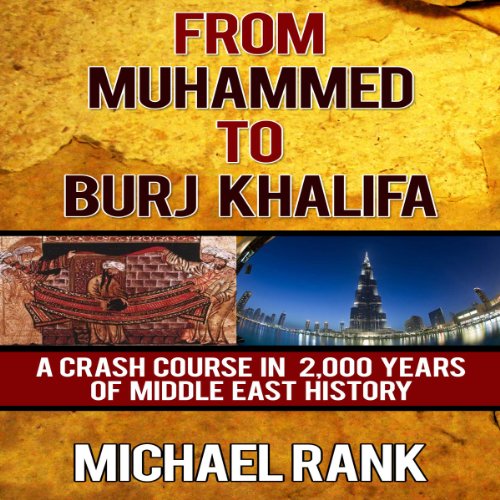 From Muhammed to Burj Khalifa

To most Westerners the Middle East and the Israeli-Palestinian conflict appear utterly bewildering. Palestinians want to bomb Israelis that force them at gunpoint to live in restricted parts of the country. Arab leaders are furious about this situation and want Israelis, 'wiped off the map' and their land given back to Palestinians, even though the real estate of the Holy Land looks something like rural Utah. And nearly all the world's leaders see fit to chime in on this dispute over the two tiny lands.

To untangle the modern Middle East conflict and the 2,000 years behind it, this book is divided into 25 concise chapters. Each one is devoted to a major theme in Middle East history, such as the beginning of Islam, the Crusades, Genghis Khan, and the beginning of Israel in 1948. They can be read in a few minutes, giving you a fast overview of the issues and help you to understand Middle East current events.

By the end you will know as much about Middle East history and the Israeli-Palestinian conflict as you would after a year-long college course. You will also sound highly knowledgeable about world affairs to your friends and associates.

If you want to understand this part of the world completely in as short a time as possible, then From Muhammed to Burj Khalifa is for you!

What listeners say about From Muhammed to Burj Khalifa

a good overview of the history of the world it just reinforces the old adage nothing is new!

What did you like most about From Muhammed to Burj Khalifa?

What I liked most was that this is a crash course and I now have a very good understanding of the sequence of events from pre Mohammad up until the last century and today.

The title A Crash Course in 2,000 Years of Middle East

Interesting, but of course it's quite brief

I appreciate this approach: I like to hear plenty of these short, summarizing audiobooks. I didn't feel it lived up to the publisher's summary ("By the end you will know as much about Middle East history and the Israeli-Palestinian conflict as you would after a year-long college course"). That would be too much to expect, of course. But for slightly over 2 hours' length, I feel it was an alright introduction.

A short , concise history of a complicated region. Well worth listening to if you're looking for an intro to the middle east.

One for the naive

What would have made From Muhammed to Burj Khalifa better?

Perhaps a Foreword could say this book is aimed at high school History and Geography classes. He could also add as recommended reading, "The Great War for Civilization: The Conquest of the Middle East" by Robert Fisk, and any if not all of Robert Spencer's books on that religion.

Would you ever listen to anything by Michael Rank again?

Not in the immediate future.

That's a tricky question because the material to go on doesn't lend itself to a Shakespearean rendition, but this is only my opinion.

If you could play editor, what scene or scenes would you have cut from From Muhammed to Burj Khalifa?

I wouldn't cut, but add some meat.

This book is suitable for Junior High School.

We would all benefit from this book

Covers a lot of important content in reasonably short manner and in an organized way.

Great concise coverage; not dull at all!

What made the experience of listening to From Muhammed to Burj Khalifa the most enjoyable?

Reader's voice was good with good intonation. The story is interesting and hits just the major highlights.

Perfect solution for someone headed for the Middle East

Enjoyed the read...narrator was excellent! Thank you for this crash course on middle east history.

Yes. It's as clear and concise a work as any I have encountered for the 'non-expert' wanting to better understand what appears to be conflict without resolution. It's also an easy listen. I'm on my third and the historical context is starting to sink in a bit.

What was one of the most memorable moments of From Muhammed to Burj Khalifa?

The chapter on Ghengis Khan, his Mongol horde and the strong possibility I might be a direct decendent! Seriously, I never realized the significance of Khan's conquests and his impact on world history.

The reading sounded much like a computer generated voice. It was clear and technically correct but the emphasis and intonation often sounds misplaced and uncomfortably artificial.

Could you see From Muhammed to Burj Khalifa being made into a movie or a TV series? Who should the stars be?

Interesting idea for this book. Dramatization of such a condensed history might make a compelling series.

I'm not sure if it is my own or the author's objectivity that influences this impression but I often felt in the reading as if there was sympathy for the underlying causes of Islamic extremism and hatred of Israel. Nothing wrong with that if true but then there was nothing in the book to influence me to that perspective. The author tells us Palestinians have failed to create a state for themselves for an even longer period of time than modern day Israel has existed. I know there is so much more to learn but this is something I find hard to understand. The book gave me what I was looking for and more. I plan to use each chapter as a jumping off point for deeper exploration and understanding.

Overall great, wish it was a bit longer though. Very much and overview but bounded in facts

A great crash course introduction into the Middle East. I'll listen to this one more than once to continue solidifying my understanding.

I would, as it's a good starting point to be able to get discussions moving - and it's so short!

What does Kevin Pierce bring to the story that you wouldn’t experience if you just read the book?

Simply ease of understanding. Another review mentions that he sounds like a robot. I noticed this as well at the very beginning, but that seems to go away quickly (or at least becomes less noticeable).

Learning about the formation of modern Israel was very surprising. This books presents everything very even-handedly (from all that I can tell) and I plan on looking into this more.

Listened to it twice the day that I bought it, which really helped it sink in.

it does what it says on the tin, it is a brief history. relatively balanced, but there is too much use of unsubstantiated opinion. For example, several times the author uses the word "many" when an accurate number would have been more appropriate and easily obtained.

I enjoyed this book very much, I look forward to starting authors other book soon.