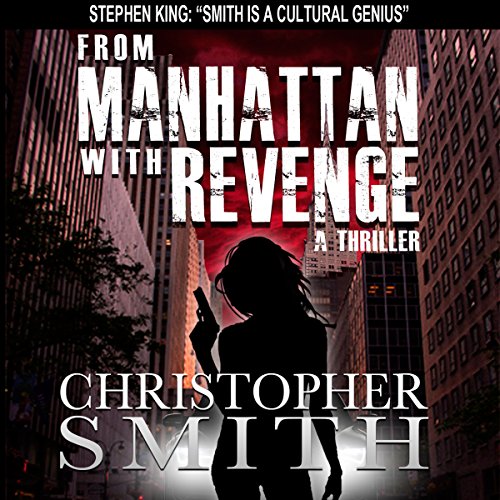 From Manhattan with Revenge

So was her lover, Alex Williams, before he was savagely murdered by a powerful syndicate who considered each end-of-cycle.

Carmen escaped their wrath while within her, with Alex dead, her own wrath grew.

Now, through unusual means, she's seeking her revenge against the syndicate for Alex's death.

Assisting her is an eccentric Park Avenue-based seasonings heiress and a 103-year-old former psychiatrist whose contacts run deep. Also joining her is fellow assassin Vincent Spocatti, with whom Carmen has worked before, and for whom she has the utmost respect.

But is the respect mutual?

In From Manhattan with Revenge, where there are so many twists, they eventually form a noose that whips around Carmen's neck, revenge comes at a cost higher than she ever anticipated.

"Put me down as an enthusiastic Christopher Smith fan. Smith is a cultural genius." (Stephen King)

What listeners say about From Manhattan with Revenge

Not sure if we will listen to the next one

Books 1-3 were very good. Good narrator and story. Book 4 was only 77 pages and was not all that. So, now book 5 that has too convoluted a story line and with a narrator that makes all men sound “quirky”. Don’t think women narrators are good at masculine voices and so won’t get another audio that has a woman for a narrator.

This is good for brief entertainment, light, forgettable, might be better with a better reader. I am not sure of the point of the story, however.