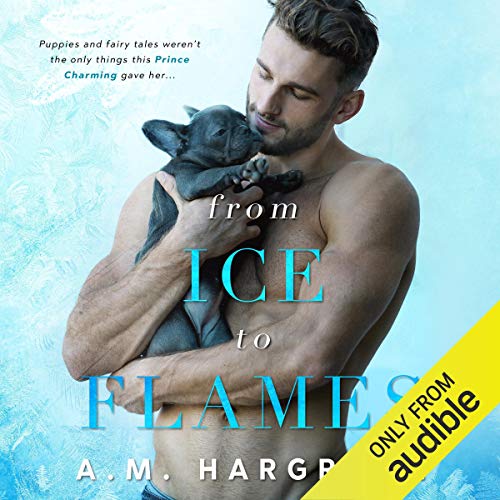 From Ice to Flames

By: A M. Hargrove
Narrated by: Holly Warren,Jean-Paul Mordrake
Free with 2 month trial

One rule: No more men.

And I don’t mean the one between my stupid ex’s legs.

I’m talking about the 150 pound furry dog said ex dropped off at my doorstep.

But I’d take Dick over any man, any day.

So why did I resemble my dog, panting and drooling, whenever I ran into Hudson West, my sexy new neighbor?

True, the gorgeous veterinarian was hotter than sin.

And my new roommate only made it impossible for me to avoid conversation with a man I didn’t need.

Until tragedy struck and some jerk decided to run Dick down.

It was hotter than sin Hudson who came to his rescue.

Then it became impossible to ignore him.

It was only supposed to be a fling, a quickie, a one and done.

We both had reasons to keep it that way…my one rule and his five-year-old son.

Except things didn’t quite work out that way.

One turned into two, then three, annnnd you get the picture.

Before we knew it, he gave me a lot more than puppies and fairy tales.

And that stupid rule?

I should’ve stuck to it because now more than my heart was at risk.

What listeners say about From Ice to Flames

What is wrong with these characters?

I spent over nine hours listening to this story, and by the seventh hour, I was ready to kill the hero. OMG, the author spent 2/3 of the book showing us what a great guy and father Hudson West was only to turn him into the most vile man on Earth. I'm sorry, but the way the author changed Hudson made me so upset, I couldn't root for him anymore. She gave Hudson a vindictive streak that was so out of character from the man she'd originally portrayed it wasn't believable any more. And then she ruined it further by turning the heroine into a spineless jellyfish. I was so happy when Millie told Hudson to shove off. When he hunted her down and yelled at her, accusing her of being self-absorbed after she left New York to be near her family, I lost all respect for Millie. She basically agreed with Hudson and asked him to forgive her. Just...no.

Hudson had shown his true colors when he told Millie she was no different than his ex and was a manipulative woman who had connived to get pregnant on purpose. Worse, he told her she lied about losing her baby two years prior?! And the kicker? He took back the puppy he had given her and told her she didn't deserve him. What. A. Douche. Don't give me that crap about him having a human moment and being upset about his ex wife. His vindictiveness was so over the top, it was not believable in the least.

Yes, these are fictional characters, but the complete one-eighty this author did with them was so abrupt and disheartening, I probably won't read any other books from her. I'm sure there are people like that in the world, but they aren't hero material.

I gave this three stars because the writing was engaging with very few errors, but I'd give it 2.5 if I could just for the major character personality changes. It was the first time I'd ever come away from a book wanting a solo HEA for the heroine alone.

I really likes these books. I love any book with children. they so make the story. romance is epic too.

A book with a dog named Dick, an adorable 5 year a sexy vet and a beautiful, sassy and independent heroine made a fantastic story. I laughed so much while listening/ reading the book. How did some authors do this? Delivering story that consumed the readers, I couldn’t stop thinking about this story when I was listening/ reading it. There were so many twists i didn’t see coming in the plot, I’m hooked in this series. I can’t wait to read about the next West brother.

I absolutely love listening to these books, they are the best love stories, you should listen to them!

I LOVE this and all the WEST FAMILY SERIES!!! Especially because she writes on the point of view with Single Parents that finds their “One”!! It’s ALL AWESOME!!!

They should rename the book to Millie cries!! I think she cried in nearly every chapter...some of it was understandable, other times it was like really??