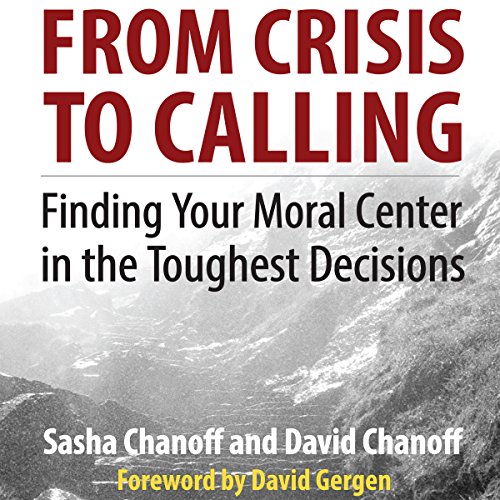 From Crisis to Calling

From Crisis to Calling

We are often confronted with choices where morality and pragmatism seem to be at odds. In these situations leaders are supposed to go with pragmatism - making "tough calls." But Sasha Chanoff became a better leader - and saved lives - when he chose empathy and altruism. Through his extraordinary story and the stories of other brave leaders, this book inspires everyone to be guided by his or her deepest moral values.

All leaders face defining moments, crises that reveal their true character. Here, Sasha and his father, David, expand on Sasha's defining moment, recounted on The Moth podcast as "An Impossible Choice." Working in the violence-torn Congo, he was charged with evacuating a specific group of refugees. Then he and his colleague discovered a group of widows and orphans not on the rescue list. Leaving them behind would mean their deaths. Attempting to take them would jeopardize the entire mission.

From Crisis to Calling puts you with Sasha as he agonizes over what to do, revealing five principles for confronting critical decisions that emerged from this experience. The book tells the stories of eight other leaders - from business, government, the military, and nonprofits - who stayed true to their own moral values in the face of enormous pressure. They illustrate the power and fulfillment that come from investing your work with compassion, empathy, and an awareness of others.