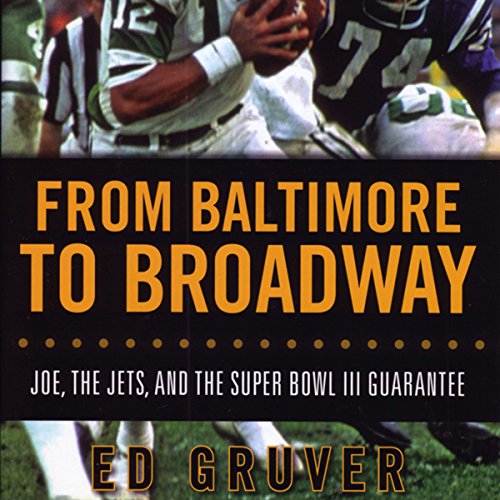 From Baltimore to Broadway

From Baltimore to Broadway

The stunning victory of the upstart New York Jets over the stalwart Baltimore Colts in Super Bowl III transformed the NFL and established the Super Bowl as America s premier sporting event.

While attending a banquet at the Miami Touchdown Club honoring his selection as the AFL s MVP, the brash Joe Nameth guaranteed a Jets victory in the forthcoming Super Bowl III and invoked a maelstrom of media attention. His bold personality, confidence, and strategic passing and play-calling during the game made good on his guarantee and gave the rebellious AFL its historic first Super Bowl victory over the rival NFL.

Baltimore called forth its share of heroics, as well. League MVP Earl Morrall turned over quarterback duties to Johnny Unitas in the third quarter. The injured legend is still possessed a touch of magic in his passing arm, and teammates hoped his leadership could save the Colts and the NFL from a humiliating defeat.

Johnny U vs. Broadway Joe turned Super Bowl III into a classic matchup that still defines the football careers of the men who took the field in the Orange Bowl that fateful day. From Baltimore to Broadway is their story - told for the first time from the perspective of the players who graces both sidelines.

What listeners say about From Baltimore to Broadway