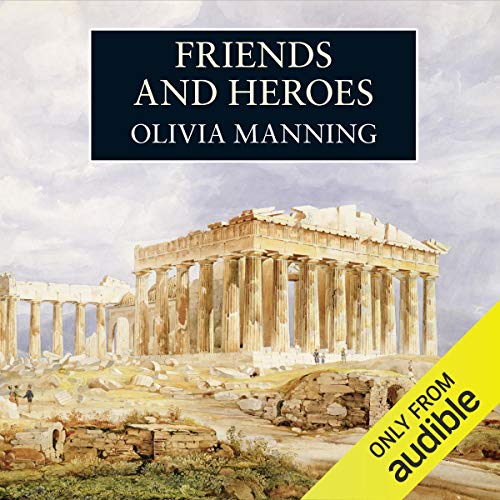 Bucharest has fallen, and Harriet and Guy Pringle have escaped to Athens in the nick of time to find several of their old acquaintances there already. But even Guy's eternal optimism fails him when he realises that his former employees feel no gratitude or loyalty to him. Guy and Harriet both come to realise that with Greece threatened by the Axis Powers, Athens is not the safe harbour they thought.

This is the third and final part of The Balkan Trilogy, which began with The Great Fortune and was followed by The Spoilt City.

What listeners say about Friends and Heroes

Harriet Walter is the finest narrator I have yet heard. Her ability to suspend disbelief is perfect. Her knowledge of other languages and accents is also perfect and highly educated.
The Balkan series is complex with many characters and nationalities. She not only balances and simplifies, but does overall service to the author by presenting these excellent books in a way that they are always clear and enjoyable to readers.
I know that she is a distinguished Shakespearean actress, but
Narration is a special art for which awards should be given.
Congratulations to Harriet Walter.

I have seldom enjoyed a narration as much as Harriet Walter's performance of these three books in the Balkan Trilogy of which this is the third. Maybe the Harry Potter books when they were first published or maybe Juliet Stevenson's narrations of Jane Austen, or The Barchester Chronicles by Simon Vance or the Girl With the Dragon Tattoo - but way back decades ago for sure. Harriet Walter is masterful with characters, accents, moods - everything plus the stories are wonderful and exactly what is needed in the middle of a pandemic to give you perspective on your own life and existence and comfort. I truly have enjoyed these books as much as anything I've read in years and my only complaint is that the final three books of the series, the Levant Trilogy, is not available in audiobook. Please make them available - with Harriet Walter narrating!!!

This trilogy (or sextet if you also add the Levant Trilogy--sadly not available on audiobook) is a little bit uneven and the narrator took some time for me to get used to. But by the end, I was completely engrossed in the lives of these variously petty, frustrating, moving, tragic, and very human characters. I don't think there is a single character you don't want to slap at one point or another.

The disbelief at encroaching disaster and the attempts to keep war at bay through stiff-lipped soldiering on were also very believable.

This is definitely not a stand alone book. You have to read the first two to understand what is going on. You can end here though, and not dive into the next three. There's enough of a sense of closure at the end to satisfy most.

Brilliant novel in the glorious narration!

This book is beautiful written and the narrator is absolutely perfect. I love listening to good story, and I wish that audible also had the Levant Trilogy with the same narrator.

Read this 50 years ago and in lockdown have been so disappointed by so many contemporary best sellers and lauded novels, decided to return to some old favourites. I’m so glad I did. Rediscovered Daphne Du Murier and now Olivia Manning. Echos of remembrance enhanced my enjoyment, but it wasn’t just nostalgia for my 20s when I read it last, but the pure pleasure of the audio experience and the quality of the writing. Yes, for a modern read, it could do with a good edit and the startling incentive sentences are sometimes weighed down by repetitive character observations but it’s still one if the best lockdown compensations and escape.

Beautiful reading of a beautiful book. Harriet's voice is perfect and gave life to the fantastic writing.

one of my favourite book and expertly read. the different voices are amazing. it is like listening to different people. please please please have harriet record The Levant trilogy.

I don’t have enough time to write the review this trilogy deserves. Just try it 🙂