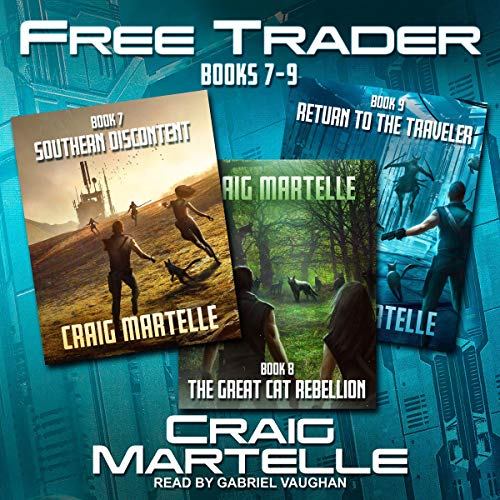 The exciting final three volumes of the Free Trader in one package! New enemies abound from the southern tip to the northernmost settlement and onward into space. Braden, Micah, the Golden Warrior, and Fealona lead the charge against those who would tear the fabric of a rebuilt society.

Book seven: Southern Discontent: A raid to steal the lightning spears from the town of Livestel drives a wedge between the Wolfoids and humanity. Braden and Micah partner with Bounder and Gray Strider as they trail the raiders to recover what was lost.

Book eight: The Great Cat Rebellion: The Golden Warrior has had enough. Seeing into the human mind has forced him to take action. He galvanizes the Hillcats with a goal of nothing less than establishing lasting peace throughout all of Vii.

Book nine: Return to the Traveler: If humanity ever wants to return to space, they need the spaceship Traveler to be safe. Braden takes it upon himself to pacify the ship and take the first step in humanity's return to Earth. Of course, he won't go alone as his friends volunteer to help.

Join the Free Trader as he travels with friends and family on a search for what matters most.