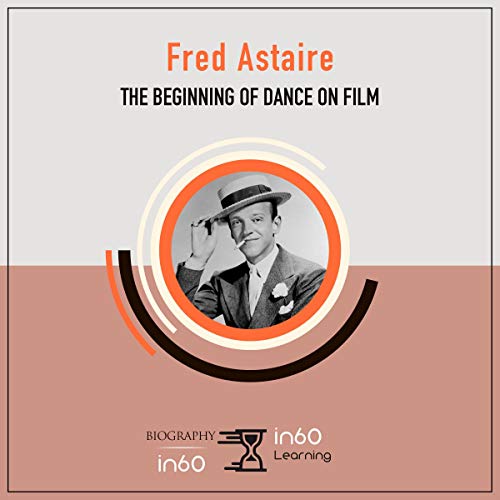 Fred Astaire: The Beginning of Dance on Film

Get smarter in just 60 minutes with in60Learning. Concise and elegantly written non-fiction books and audiobooks help you learn the core subject matter in 20 percent of the time that it takes to read/listen a typical book. Life is short, so explore a multitude of fascinating historical, biographical, scientific, political, and financial topics in only an hour each.

Fred Astaire, 1899 to 1987, born Frederick Austerlitz, was an icon and extremely influential American dancer, singer, actor, and choreographer. Astaire was born in Omaha, Nebraska. Astaire's mother longed to escape Omaha since first moving there due to her husband’s work and she decided to use her children’s talents to enable her progression to bigger and better things. Astaire's sister, Adele, was a natural dancer and singer from very early on and Astaire’s mother planned a brother and sister act. Although Astaire refused dance lessons at first, he quickly picked up choreography and showed himself to be a natural talent; he also began learning various instruments. Soon after the family moved to New York and both the Astaire siblings’ show business careers quickly took off. Overall, Astaire’s stage and film and television career spanned 76 years. Astaire starred in more than 10 Broadway musicals, over 30 musical films, and numerous television specials, radio specials, and recordings. A highlight of his long career is often considered his time with RKO Radio Pictures and his many dances performances with Ginger Rogers between 1933 and 1939. Astaire died of pneumonia in 1987 at the age of 88 and his last request was to thank his fans for their years of support. Astaire influenced many of today’s most important dancers and choreographers and Gene Kelly, another famed star of filmed dance, famously stated that "the history of dance on film begins with Astaire".

What listeners say about Fred Astaire: The Beginning of Dance on Film