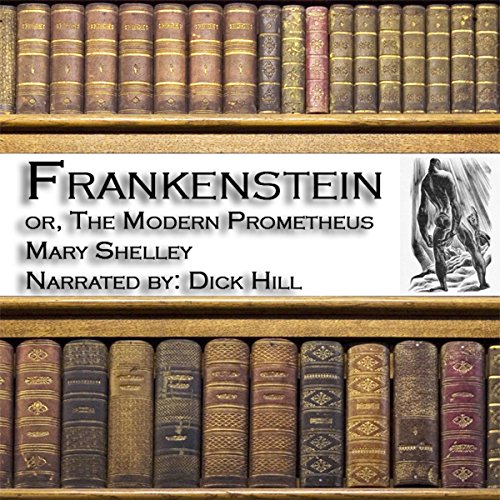 Victor Frankenstein learns how to create life and creates a being in the likeness of man, but larger and more powerful than the average man. Frankenstein rejects the creature, and lives to regret his desire to create life, after it kills his brother William.

Frankenstein is a warning against the "over-reaching" of modern man and the Industrial Revolution - as alluded to in the novel's subtitle, The Modern Prometheus. Frankenstein has significantly influenced modern literature and popular culture, and spawned the "mad-scientist" genre of horror stories and films.

What listeners say about Frankenstein

Made the flu a cozy excuse

I have saved this story for a long time, and suffering from the winter flu the moment seemed right. Audible had many versions available and it was hard to choose. The voice of Dick Hill in the preview persuaded me and I wasn't disappointed.

Mary did a very good job of conjuring up the world of Frankenstein and his monster and their tormenting plight of life. I was very moved by this story. It is thrilling, touching and scary all at once.

The narration by Dick Hill was entirely perfect. His voice and Mary's story became this rollercoaster of an audio book, that just made this winter flu a cozy excuse to relax and enjoy good literature.

This is one of the best books I've read or heard. The narrator expertly evokes the powerful emotions of fear, agony, and revenge that the author so brilliantly penned. The crafting of the tale (and the tales within the tale) is very clever and nuanced. The listener is drawn into the time and place of the action and then swept away by the engulfing currents of horror and rage felt by Frankenstein and his monster. The vivid descriptions of the benighted landscapes, humane (and inhumane) characters, and horrifying murders are unparalleled. I recommend this recording over any horror flick, if you are looking for an intelligent horror story that will stay with you for the rest of your life.

At first, the accent of the reader was just a bit uncomfortable for me. After I had listened for about twenty minutes, I began to get used to his accent and get into the story. As I "read" I became fully engrossed in the narrative, and had trouble putting it down. It is full of rich vocabulary, but it is written in such a way that the vocabulary becomes secondary, and I believe that even high school students will find themselves engrossed in the story within a very short time. Frankenstein, the novel, is so different and so much more entertaining than any movie version of the story you have ever seen. I marveled at Shelley's use of words to create feeling and emotion through her use of characterization and figurative language, and the narrator's voice was a welcome addition to the total intensity of the book. Mary Shelley wrote this book at 19, and had already mastered the language beyond the capabilities of most modern-day writers. Frankenstein is not a "monster story," but a true adventure, full of passion and compassion, that should be read by all.

I didn't really know the story of Frankenstien beyond movies. there is so much more to it. This is an excellent classic - there is more back story than you know if you haven't read it. The narrator is superb. There are two sort of slow sections but preservere - it's worth it.

A must read on every level. Shelley's classic is worth multiple reads. I found it a heartbreaking story of incredible depth, both philosophically and emotionally. Not a long story, but it will stay with you over time.

I couldn't finish it.

This book was awful. It was slow and torturous. The accent used for the narrator made it difficult to listen to. This was the first book that I couldn't finish.