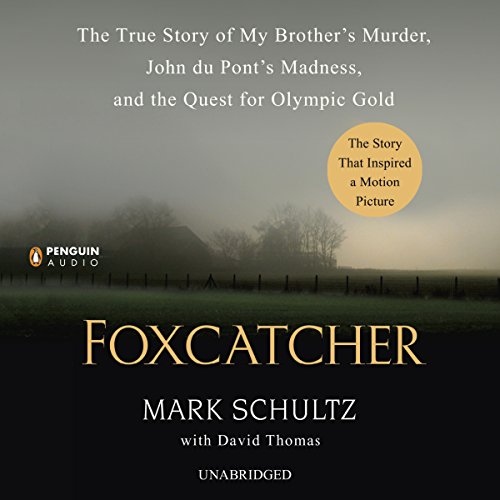 The riveting true story - soon to be the subject of a high-profile film - of Olympic wrestling gold medal-winning brothers Mark Schultz and Dave Schultz and their fatal relationship with the eccentric John du Pont, heir to the du Pont dynasty.

On January 26, 1996, Dave Schultz, Olympic gold medal winner and wrestling golden boy, was shot three times by du Pont family heir John E. du Pont at the famed Foxcatcher Farms estate in Pennsylvania. Following the murder, there was a tense standoff when du Pont barricaded himself in his home for two days before he was finally captured.

Foxcatcher is gold medal winner Mark Schultz's memoir, revealing what made him and his brother champion and what brought them to Foxcatcher Farms. It's a vivid portrait of the complex relationship he and his brother had with du Pont, a man whose catastrophic break from reality led to tragedy. No one knows the inside story of what went on behind the scenes at Foxcatcher Farms - and inside John du Pont's head - better than Mark Schultz.

The incredible true story of these championship-winning brothers and the wealthiest convicted murderer of all time will be making headlines this fall, and Mark's memoir will reveal the true inside story.

What listeners say about Foxcatcher

more about the author than his brother

Totally weird story, but some interesting insights into the world of amateur wrestling and the du Pont dude. The book however, seemed to center around the authors challenges, rather than the brother du Pont murdered.

totally, not what i expected...only about an hour spent on the murder and the rest on wrestling terms.

First, I was interested in this box after seeing the trailers for the movie so I went in with a script in my mind of what would happen. I would recommend this book as a book about athletic ambition, what wrestling is like, and the story of a person who knew John DuPont. This is not a book that is a biography of John DuPont or any explanation of DuPont's life and motivations. So I would recommend it as a book for what it is - a story of an Olympic wrestler, his life, his brother's life, and a sad crime.

hope the movie is less boring

What would have made Foxcatcher better?

Shouldn't be described as a murder story or a quest for olympic gold - there is nothing inspirational about this story. First half of the book is spent describing wrestling moves in excruciating detail. All in all comes off kind of whiny, although I get that this guy had some hardship, it's not remotely interesting until you get to John du Pont, who is a jackass, and even not that interesting in this book. there is definitely a story here, just should have been written by a storyteller.

I would recommend this book to a wrestling fanatic, but otherwise, I wouldn't recommend the book. I found the book to be, well, boring. It lacked emotion or any sort of personal growth, because the author was too busy explaining how he won matches and who he was training with at any given time. The juicy stuff, like his brother's murder and DuPont's craziness was a blip.

I am listening to "Our Magnificent Bastard Tongue" by McWhorter

Have you listened to any of Stephen Mendel’s other performances before? How does this one compare?

Do you think Foxcatcher needs a follow-up book? Why or why not?

I purchased the book because I heard the movie did well (though I have not yet seen it) and the book cover "...a story about my brother's murder, DuPont's madness..." Hollywood must have taken a lot of artistic license, because this book does not live up to the book cover.

The book title is misleading

I listen to several books a week and this was terrible. This book is not about the murder. It's a very selfish and narcissistic view of Mark's life. It should have been titled "Learn how to wrestle while I wine about my life". UGH!! What happened to Dave is terrible and sad.

I bought the book because I saw the movie. The movie was definitely most interesting. This book feels like Mark's platform for a pity party. "It's everyone else's fault I'm not happy". "Everything is John DuPont's fault" Reality check Mr. Schultz, we would all love to have someone support us while we hone our skills....Really??? I will never get those 8 hours back from listening to this book I hope a spare another listeners time. :(

I listened to this book from start to finish without stopping. This book was simply fantastic. I was very interested in this story because I went to BYU wrestling camp as a teen, and The author, Mark Schultz, ran the camp. Mark was a really nice and down to earth guy and was very interested in the story. Thank you Mark Schultz for sharing your story. I wish you all the best

This is a story that has interesting things to say, but is not written well. There are slabg words, meandering thoughts, and short non-descriptive sentences that chop everything up.

More about Mark Schultz and wrestling than Dave Schultz, John Dupont and murder. Of the 7 hours of this book less than 30 minutes in the last few chapters are dedicated to Dave and his murder. Very disappointed with this book.

Good content but boring until DuPont. The movie could've been more accurate - watch the documentaries.