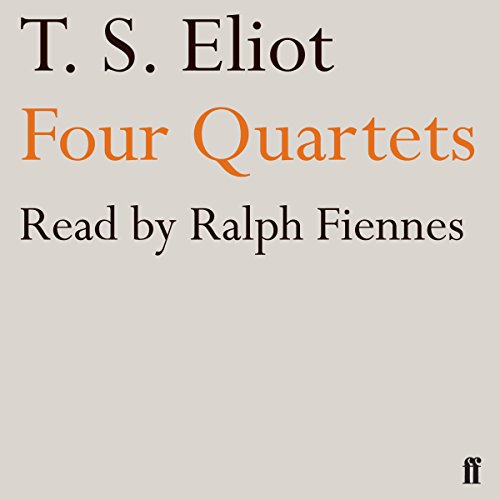 A masterly new recording by Ralph Fiennes. Four Quartets is the culminating achievement of T. S. Eliot's career as a poet.

While containing some of the most musical and unforgettable passages in 20th-century poetry, its four parts, 'Burnt Norton', 'East Coker', 'The Dry Salvages' and 'Little Gidding', present a rigorous meditation on the spiritual, philosophical and personal themes which preoccupied the author.

It was the way in which a private voice was heard to speak for the concerns of an entire generation, in the midst of war and doubt, that confirmed it as an enduring masterpiece.

"Eliot's own reading of Four Quartets was masterly, but this recording is an elegant tribute." ( The Guardian)

What listeners say about Four Quartets

Ralph Fiennes does a magnificent job

Beautifully read, superbly presented and a joy to listen to. The beat recording I've heard.

I listen to this regularly at night. TS Eliot has revealed a new perspective on life to me, now alone in my late 70s. The tone of Ralph Fiennes.voice is calming and reflective and had led me to other titles equally rewarding

Beautiful and meaningful narration. I have listened to this many times. Ralph Fiennes interpretation is excellent

Fiennes makes sense of the dense

T.S. Eliot isn't for everyone, and I suspect he'd be proud of that. Much of 'Four Quartets', however brilliant, is also mired in the sort of intellectual bombast that critics celebrate for its seriousness and technical finesse.

Praise must be given here to Ralph Fiennes, whose delivery does much to revivify the more arid areas of the text. With an almost hypnotic smoothness, he elevates poetic posturing to a point where the listener can't help but be immersed in the shifting landscape. As

'garlic and sapphires in the mud
clot the bedded axletree'

of Eliot's often precise, often deliberate convolutions, Fiennes delivery is as haunting as it is 'fructifying'.

Beautifully read, this will take me ages to listen to over and over - it is such a brilliant poem and merits reflection.
I wish I had noticed that there is another version which includes The Wasteland also in the one credit, I would think that was better value.
But still. Brilliant.

Well narrated by RF. difficult but poignant stuff. A good Sunday night listen in the shed.

This poem says it all. The voyage to truth is a Divine revelation. Through endless humility there is union - “The Fire and the Rose are one” 😊🙏❤️

This piece of literature was well read by Ralph Fiennes. Relaxing to listen to on a Monday evening.

I listen to this performance a lot

There is no better territory to explore than the wilderness these two great creative souls have strived to capture.

The rhythm and meaning of Eliots words are well narrated by an actor who always finds an intriguing and effective balance between sensitivity and menace.

fill pf luscious evocations 9f time and place. i use it to drift off into dream filled sleep