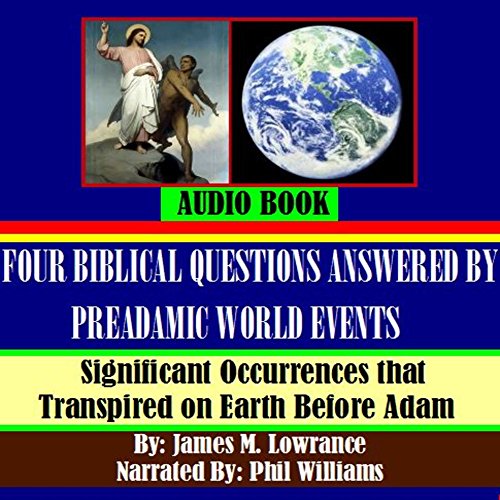 This audiobook presentation on the biblical "Genesis Gap" study, also referred to as "The PreAdamic Creation", is presented in terms that can be understood by theologians and laypersons alike. It is a highly intriguing Bible subject - one of the most interesting contained within The Holy Scriptures.

Why is the study important? Because it lends greatly to an understanding of what the evil spirits called "devils" are (the tempters of mankind) and where they came from. Jesus dealt with these fallen angels, throughout his earthly ministry. They are sometimes also referred to as "demons" and "unclean spirits" as well. Since Satan was the lone tempter of Adam and Eve, these other fallen angels that became a part of his evil empire on earth (Ephesians 6:12 - "We wrestle not against flesh and blood"), were a part of an angelic rebellion (2nd Peter 2:4) that is required to have occurred before Adam's domain was made for him (at a preAdamic time period). These angels were incarcerated (Jude 1:6, 2nd Peter 2:4) but due to Adam's sin, Satan became "the god of this world" (2nd Corinthians 4:4) and some of these imprisoned angels were released to help Satan, due to man's sin.

Why I Write and Teach the Genesis Gap Bible Study

The Genesis Gap Bible Teaching in a Nutshell

I believed this when I was young, but others said it cannot be. Now I m believer in this theory .