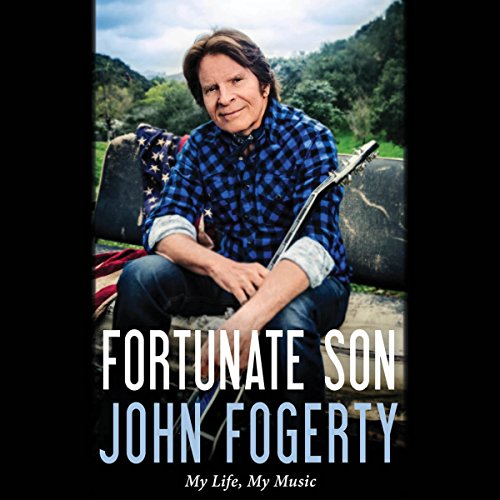 The long-awaited memoir from John Fogerty, the legendary singer-songwriter and creative force behind Creedence Clearwater Revival.

Creedence Clearwater Revival is one of the most important and beloved bands in the history of rock, and John Fogerty wrote, sang, and produced their instantly recognizable classics: "Proud Mary", "Bad Moon Rising", "Born on the Bayou", and more. Now he reveals how he brought CCR to number one in the world, eclipsing even the Beatles in 1969. By the next year, though, Creedence was falling apart; their amazing, enduring success exploded and faded in just a few short years.

Fortunate Son takes listeners from Fogerty's Northern California roots through Creedence's success and the retreat from music and public life to his hard-won revival as a solo artist who finally found love.

A fantastic journey through a troubled and difficult life that resulted in the soundtrack to a generation.
Whilst Fogerty is not the strongest of narrators, it is heartfelt and honest and his wife brings a certain humanity to her sections of the book.
It's a valuable lesson about life and being careful what you sign and also about the company you keep.
Enjoyable to the last syllable.

Such a Great Story

Well if you enjoy Rock n Roll, and are interested in the background story, then you need to read or listen to the story. I have to chuckle in reading the reviews regarding John's delivery. He seems like such a sweet, innocent guy, and yeah he's reading it like a 5th grader, standing in front of class, reading his paper, trying his hardest to get a B, but hey that's him, deal with it. It's kind of charming, but yeah... You may want to read it if that annoys you. The content is the key here. Highly recommended!

A great story of never giving up on what you love

Great but sad story of betrayal of people you thought you can trust from family to friends. Sad to see such a great artist kept down by greedy people. I thought the story was honest and heartfelt. I love that he read it himself.

Highly recommend this book to anyone interested in CCR or John Fogerty. Very honest and interesting. Didn't get the feeling he held much back. Kept me listening and wanting more. Bottom line excellent book just like John's music, a work of art.

Bump the speed to 1.5; you'll be better off! A sad but great Story , insightful and amateurish at the same time

Thanks John and Julie - I understand it all now...

I felt like I had a 15 hour personal conversation with John, learning about all the things I questioned and could not figure out since the 60's.

John is Fortunate but also quite deserving of all he has given his dedication to his craft and his ability to have accepted and moved on from the painful past.

His deep sense of commitment and wonderful love of his children and wife, Julie is an example (inspiration) to everyone who wonders if you can be a "rock star" and still have simple, old fashioned values.

Great book I wish he would have wrote it sooner. Amazing interesting life from an amazing man.

Would you consider the audio edition of Fortunate Son to be better than the print version?

No. John Fogerty is a phenomenal musician and songwriter. But his reading of the book is just monotone and dry.

All of the insights of what really happened through his life and how things went.

Who would you have cast as narrator instead of John Fogerty?

No extreme reaction. It was the simple story of his life.

I have to again emphasize that the reading of the story was too bland. I stopped paying attention after a while.

A great book, read by the author. everything you ever wanted to know about Creedence and John's life and career. I enjoyed John's read of it as well. thanks!

Would you listen to Fortunate Son again? Why?

What other book might you compare Fortunate Son to and why?

When he let the wall come down and played again under peer pressure.

This is a good book to read in the hammock. A lullaby.

what a great story full of ups and downs, we loved every single word and as for his former bandmates and his boss from fantasy records what a bunch of blood sucking vampires!!
Enjoy your mystic highway John, you fully deserve a place in the promised land,
Julie and your kids helped you see a better world and we are all the richer for your experience, long may you find Happiness & love John Fogerty,
Regards 2 Happy Fans.

Interesting story, great to hear his side of the story. Was a bit difficult to listen to at times,. Love his singing voice, not so much his reading. 😊