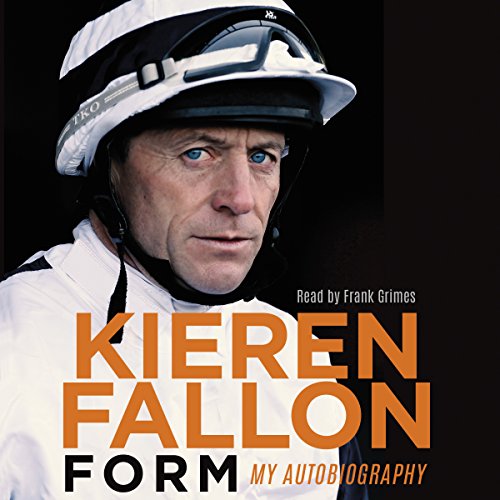 Kieren Fallon was one of the world's greatest jockeys, but his career was littered with controversial incidents. Now, in his powerful and honest autobiography, he tells all. Unabridged audio read by Frank Grimes.

British Champion Jockey six times - without terrifying injury and mental trauma it could have been many more - he won more than 2,250 races, including the Derby three times, the Prix de l'Arc de Triomphe twice, and more 2,000 and 1,000 Guineas (nine) than anyone else in the history of the sport. He was also accused of race fixing, resulting in an astonishing Old Bailey trial at which he was completely cleared.

No-one would question his ability in the saddle. Few, if any, have ever been as good at coaxing the best out of their rides. But his extraordinary rapport with the horse has not quite been matched by his dealings with humans - particularly not those in authority with whom he's had a career-long battle.

Now Fallon recalls his rise from a rural Irish family with no racing connections, and his frequent collisions with the media as well as many of the people who run the sport. With wit as well as absolute frankness, he tells of the huge pressures on top jockeys - even those without his external problems - and how his dazzling riding career was marred, then brought to a premature halt by campaigns of lies and innuendo.

Brutally honest as well as entertaining, this is a unique sporting memoir.

What listeners say about Form

If your horsey and like the information and you want to understand that they really do love horses and do so much for the horse that’s what this book is about. Nicely read and spoken Worth a read.

Straight from the horses mouth..

What does Frank Grimes bring to the story that you wouldn’t experience if you just read the book?

Absolutely no one could have done it better

Kieran's own story, love this book.... beginning to end
You do not even have to be a big race fan to enjoy this book.
Listened to it, in two back to back car trips, in two days
Wonderfully done... narration top notch..

I work in the racing industry so it was good to hear Mr Fallon put his side across. He has done a masterful job. To reach the top of your profession takes some doing. Especially when the press are making up lurid stories to sell a few newspapers. The list of big races he has won and great horses he has ridden is a long one. I wish more autobiographies from the racing world were available. Bottom line if you like racing you will like this.

narrator was very reflective of the author in his Clare accent. A fabulous book with a lot of heart. Well done Kieron Fallon

My father always declared that Fallon was the best jockey he'd ever seen, often winning on horses that should have lost. As a teenager, I was delighted to see Fallon join Aidan O'Brien and Ballydoyle, and thought this would help focus him a d keep him out of trouble. Fallon is a complex man, however and seemed to find trouble a lot easier than most... This book confirms that. Although he goes into great detail in some areas, he somewhat conveniently glosses over other parts of his career - what actually happened with Mrs. Cecil, failed drug test when already in trouble with BHA etc. There is definitely a sense that Fallon has been wronged at certain times of his career but he's not always willing to accept his own mistakes and shortcomings...

brilliant to hear the truth behind the controversy

great story, I remember all the headlines throughout Mr Fallon's career and the bias that was shown by the media. good to hear the record set straight. he was one of the greats of the turf!

A thoroughly enjoyable listen and well performed. One of the best autobiographies I’ve read or listened to.

STILL NOT SURE IF HE CHEATED OR NOT

Was a very good listen, however after listening to his story I’m still not convinced he didn’t stop horses on a regular basis defo recommend a listen to tho

The Highs with some sad Lows

Having spent my working life on the edge of racing I thoroughly enjoyed this book, aided by an excellent narrator Frank Grimes

Exceptional - flies by, and makes u feel for him

V good account of his racing career, and how flimsy ‘evidence’ can dramatically affect a high profile persons career. I really enjoyed it - and feel he has been v hard done by. The British racing authorities were/are vindictive and amateurs. I wish him well.

it is more than just a racing story. it takes you from rural Ireland right around the world to all the major racing centres and from the training gallops to the court room.