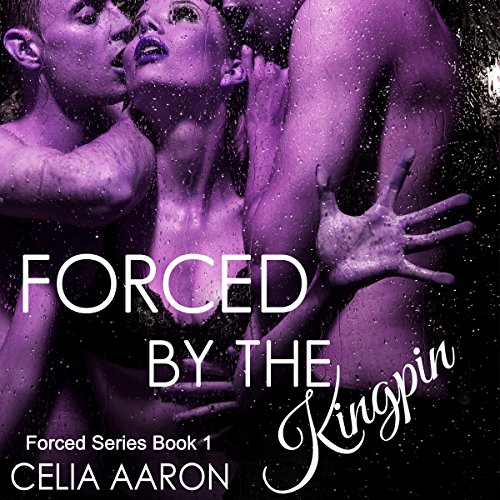 Forced by the Kingpin

This is a quick dose of dirty that can be heard in one sitting...

I've been on the trail of the local mob kingpin for months. I know his haunts, habits, and vices. The only thing I didn't know was how obsessed he was with me. Now, caught in his trap, I'm about to find out how far he and his local cop-on-the-take will go to keep me silent.

The next books in the series:

What listeners say about Forced by the Kingpin

First of all let me premise--sex when the other person is not interested is rape. I believe that many of our romance novels are filled with sketchy scenes of rape/ assault disgised as "love". (Snort)

To that end, when I know that I am about to listen to a scenario that I am looking for, I expect this. I loved listening tot he hot steamy dirty sex of Forced by the Hitmen so how could I go wrong. I love Robert Coltrane's rough dirty voice. Yet, this did not do it for me. I don't expect love from an erotic read. I don't even expect further contact, but I was disgusted by the fact that this woman was willing to sell her ethics for 25 million dollars. Sex can't be worth that much--can it? My only thought was that this should have been Getting With the Woman Who Sells Herself. This story was just too out there and too full of holes. I fast forwarded this audio. Not sexy at all. Waste of money and time!

Mutual violence that is sexually charged and enjoyed by all involved. This story seems to be a rape at the start but turns out to be a sexual romp for the three participants. Dominance is used to heighten their pleasure and the end is a surprise that makes you think that they are all
made up with the same tastes and desires.

I loved this short story couldn't put it down. Jessica is a journalist and she is doing a story on Alexi Karasov about his dirty business. One night when she was chasing Alexi she was stopped by officer Jackson, but he put her in his police car and took her to a wherehouse. There Jackson and Alexi did what they wanted to her, but when they were finished Jessica had a secret of her own.

What did you love best about Forced by the Kingpin?

quick, sexy, short-story, with little more than a forbidden sexual fantasy played out in a few minutes, this is exactly what you've been searching for.

Have you listened to any of Robert Coltrane and Rita Rush ’s other performances before? How does this one compare?

I like Robert's kind of barely contained glee when the heroine follows him as he planned.Rita sounds like a woman who is unapologetic about liking what she's made to do.

A lacking story. The setup of this tale was attempted but still lacking, which resulted in the story being so implausible that I couldn’t enjoy it, though I certainly tried to. Having to leave plausibility when you push the start button for stories is sometime required and is, thus, understandable when listening to fiction. But I still require a bit more. I require enough in the story to believe that—even at the end of reality or the height of ignorance or stupidity--it could happen.

There was 1 longer sex scene and 1 shorter one. There is no m/m sex during the m/f/m sex. There is vaginal, oral, and anal sex. And plenty of focus on the fluid produced during sex. But I don’t like stories where males refer to a woman as a bitch. I get rough sex and the accompanying talk that can seem insulting or uncaring. But I don’t think bitch fits into that. And that doesn’t fall into the nasty sex talk category. And the way “bitch” is used is not as foreplay. They refer to Jessica as a bitch and call her that while forcing her (sort of pretend) to have sex. So it’s not to turn her on but to belittle and put her in her place. They also called her a c*nt. Not sexy. Also, the male characters consistently talked about sexing (using harder language) Jessica until she couldn’t walk and until she was raw. Again, the line between consensual rough sex and uncaring or brutal sex can be a thin, but the language used in this story crossed that line, I think.

There’s a slight twist in the story that eases concern for Jessica. Listeners don’t leave thinking that rape occurred. That is good, but the reaction of the men to the twist was so absurd and unbelievable. And all 3 of the characters were unlikeable people. So nothing mattered when it ended except that it was, thankfully, the end. On top of that, the ending was the dumbest ever. I can’t say more without giving away the ending.