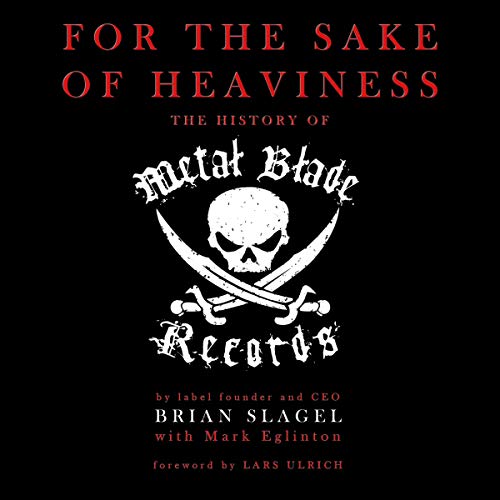 For the Sake of Heaviness

For the Sake of Heaviness

The story of Metal Blade Records is the story of Brian Slagel - a metal-obsessed Southern California kid who launched a fanzine and landed a record store job before cobbling together what he assumed would be a one-off compilation of fledgling bands from the LA scene. Released in 1982, the Metal Massacre LP included the debut recordings of local groups such as Steeler, Malice, Ratt, and Metallica. In the wake of the album's unexpected success, Slagel virtually stumbled into creating a proper record label, issuing the first releases by Bitch, Armored Saint, and Slayer the following year.

Read by Brian Slagel in his own casual and informal style, For the Sake of Heaviness is an inside look at how he built Metal Blade from a one-man operation in his mom's non-air-conditioned garage to the preeminent international home of heavy music it is today. He shares his insights into signing and working with Cannibal Corpse, Flotsam and Jetsam, Gwar, King Diamond, Manowar, Mercyful Fate, Overkill, and others.

Always hard at work on a diverse range of projects, Brian reveals the early advice he gave that helped guide Motley Crue's career; how he helped Metallica replace their bassist - twice; his detailed work on Thin Lizzy and Alice Cooper reissues; his behind-the-scenes role in the careers of Mother Love Bone, Alice in Chains, and Lamb of God; and his unlikely ventures with kindred metal heads - from hockey star Ken Baumgartner, to celebrity chef Chris Santos, to The Howard Stern Show's Richard Christy, to comedians Jim Florentine, Don Jamieson, and Jim Breuer.

Throughout For the Sake of Heaviness, Brian steps aside to present first-person insights and extended guest interviews featuring friends, colleagues, Metal Blade staffers, and a long list of artists, including Metallica's James Hetfield, Slayer's Kerry King, King Diamond, and many more. Each of these segments is performed in the audio edition by John Bush of Armored Saint.

Brian highlights the ins and outs of his 35-year metal odyssey, from promoting small shows in California's San Fernando Valley in the early days, to forging a major partnership with Warner Bros. Records; from weathering the Parents Music Resource Center's attempts to regulate lyrical content, to squaring off with Time Warner over Gwar's envelope-pushing themes; from nearly going bankrupt after underestimating the impact of the rise of CDs; to surviving and thriving in today's rapidly changing music business environment.

Featuring a foreword by Metallica's Lars Ulrich, For the Sake of Heaviness pulls back the curtain to reveal the definitive look at how Metal Blade began, what they've accomplished, and where they're going. With the help of cowriter Mark Eglinton, Brian Slagel invites the listener into a personal conversation about his life's passion and the passion that drives Metal Blade - finding, exposing, and promoting the best heavy music on the planet.

Great book for fans of the label and metal in general.

Also it’s great to see some representation for the scene in quality audio books by key people. Metal Blade played such a pivotal role in the early scene and it continues to this day.

Gives a good account of the label (and before), good audio quality although it is read by the author not a professional.

killer flashback to the 80's metal scene and beyod

great book, brought back tons of memories of la thrash and speed metal. having John Bush kf Armored Saint do the narration was PERFECT.
loved this book

Great insight into the metal scene and the music industry as a whole. Lots of cool info including stuff that i wasn't aware of even as a longtime metal fan. Brian Slagel and John Bush are great readers. Would recommend.

entertaining and informative, must listen.

This is NOT a bunch of rehashed stories we already new like so many metal books. This is first hand new info straight from Brian Slagel. Awesome.

Loved this book,early look into some of American heavy metal bands that we know tofay

This book really took me back to the 80’s and the bands I rapidly grew to love. My all time favorite bands include so many who got their start at Metal Blade. If you’re a 50ish metalhead like me and want a fun behind the scenes tour of your life’s soundtrack, you need to get this one.