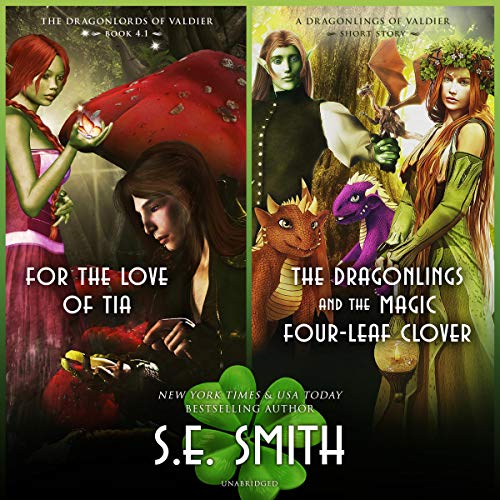 For the Love of Tia

Tia is the Keeper of the Stories for the inhabitants of Glitter. She dreams of a life she knows will never happen, but hope blossoms when a strange creature is captured at the entrance to their kingdom, and Tia remembers the legend of the goddess that will renew their world.

Jett’s thirst for adventure leads him to a previously undiscovered cavern where an unusual kingdom exists, and he is captivated by their beautiful Keeper. Unable to resist, he returns again and again until he knows he must steal her away....

The Dragonlings and the Magic Four-Leaf Clover

A campfire tale while on a camp-out with their dads has the dragonlings and their besties enchanted with a mythical kingdom called Glitter, home of the magical and mischievous Great King Leprechaun and the Little People. When the younglings discover their dads have disappeared, they are certain King Leprechaun is responsible. Armed with a magic four-leaf clover, the dragonlings and their besties will do anything to save their fathers, including tricking the King by using their golden symbiots - because everyone knows a Leprechaun can’t resist gold!

Lovely little box set with great narration. Great fun having these two books together and I liked that the Magic Four Leaf Clover is about Tamblin but not his real story. I hope. BOOK REVIEWS FOR THE LOVE OF TIA Be aware this book is very short and emotional but fits in with the Dragon Lords of Valdier series. Whilst this is not an integral part of the series, this really could have been a full story on its own it was so good. This ties in with Ambushing Ariel when Ariel finds herself trapped in a cavern and helps save a planet. We don’t get the whole conversation that takes place but we do get to meet Jett, Tia’s secret admirer. This is a short cute story telling us more about Tia, who we met in Ambushing Ariel. Tia is the Keeper of the Stories of her people. She meets the foretold giant (Ariel) who is destined to save her world. Tia also has her own story to tell, with a heart wrenching act. Jett steals her away to be his bride. Unfortunately for Jett, Tia is dying and Jett makes the ultimate sacrifice. We just need her brother Tamblin’s story now. THE DRAGONLINGS AND THE MAGIC FOUR LEAF CLOVER Wonderful short sweet story with Goddesses making wishes come true. On a father and children camping weekend, the two Goddesses Arosa and Arilla cause some fun. Paul tells a campfire tale story of Leprechauns and Magic Four Leaf Clovers. The two young Goddesses listen as well and decide it would be fun to get involved by granting Morah a wish. When the morning comes everything has changed and the next adventure begins. Loved that we go back to the moon and visit Tamblin, Tia and the others again. A nice little surprise in regards to Arosa. Though not as laugh out loud as previous dragonling books, this was still humorous and a fun read.

Two cute novellas in the world of the Dragon Lords of Valdier.
Chapters 1-5: For the Love of Tia
Sweet little story told from Tia’s POV, of when Ariel found Glitter and Tia found love.
Chapters 6-21: The Dragonlings and the Magic Four-Leaf Clover
A camping trip with daddies and dragonlings takes a detour when a goddess hears Paul tell a story of leprechauns and Glitter.
Brenin does a good job with narration and he’s definitely the voice of the series.

S.E. Smith writes some of the of the best stories I’ve ever heard. And the narrater David Brenin, makes the storie come to live.

Getting more of Tia was fabulous. The SE Smith blends the stories and make them feel all interconnected is one of the main reasons that I always come back for more.

Seeing all the character from previous books of this series and the intertwined ones makes for all the more enjoyment.

David B makes me so comfortable with familiar voice and makes them all feel like friends.

I loved both of these stories. I loved Tia and the love that her and Jett. I also love everything and all these that have to do with the Dragonlings and their friends.

I really enjoy the Dragonlings stories. Their “adventures “ are full of fun and make me laugh outl loud. The idea of takiing a story or myth and creating activities only children can think of runs through many of their tales. Yet each telling is unique. The personalities of the children are as distinct as those of the adults which is masterful character development and quite an achievement. My only objection is the language of the children. Adding an S to every other word is kind of silly. But the narration is very good so I can overlook the repeated s as a means of articulating child speak. I can’t wait for the next book featuring any of these characters. The first story felt incomplete. It was a good read, but needed more context. It is a preface.