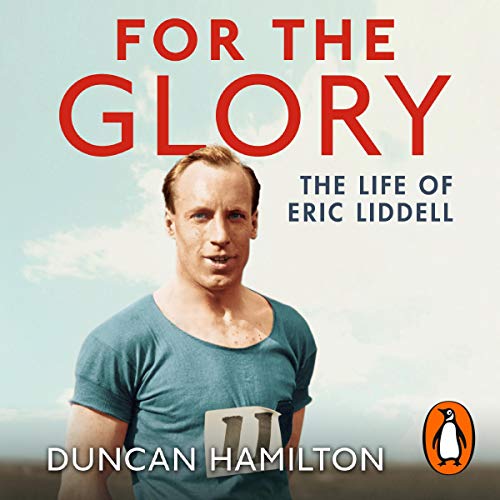 Eric Liddell was as close to a saint as any man in modern history has been. Renowned for his athletic prowess, it was also his deeply entrenched values that set him apart from the crowd. These qualities were never better illustrated than in the 1924 Paris Olympics when, having declined his place in the 100 metres owing to the fact that the race was run on a Sunday, he produced an astonishing performance to win gold in the 400 metres and captured the hearts of the world.

Liddell was immortalised in the Oscar-winning Chariots of Fire, but that film barely scratched the surface of his life (as well as being economical with the facts). It was China, where he had grown up, that was Liddell's passion, and his zeal was to improve the lot of its most unfortunate people in a time of terrible violence and danger, when the country lay under the brutal hand of the invading Japanese army. He was literally on a mission, a force for good in the world.

For the Glory takes the listener from Liddell, the fastest man on the planet, through Liddell, the man with a higher purpose, to Liddell when he had to be stronger than all around him, detained in an internment camp under terrible conditions, when he became the moral centre of an otherwise unbearable world. Liddell would make the ultimate sacrifice, but the story of his life continues to inspire generation after generation, from all walks of life. This is the story of a true hero of our times.

What listeners say about For the Glory

For the Glory of Go(l)d

Challenging and captivating, this biography of Eric Liddell rounded out my little understanding of his life. A godly man who lived out his convictions on the track and as a missionary, I have been inspired especially to pray for my enemies - as Liddell had every reason to hate his during his internment by the Japanese during WWII. The ‘second half’ of his life is arguably the more interesting, especially how he managed to be so sacrificial to those suffering in internment camps, although the Olympic period contains fascinating insight into the athletic philosophies of the time. I highly recommend this audiobook.

loved it, makes you think about your life and how we all can strive to be better people

An amazing story of Eric Liddell. Well worth purchasing and listen. For anyone who has an interest in sport, humanity and world history

Great story about a great man. Only negative was that too much of the writers opinions and long winded descriptive but irrelevant rantings crept in

A great story very well narrated but shame about American pronunciation of a few words: baton, clerk, khaki... A British story read by a British actor didn't need it. Sorry Audible, you're usually better than this.

One of (if not the best) audio book I have listened to so far.

So moving, so inspiring.

I watched the movie Chariots of Fire and was very impressed with Eric liddle then... but listening to this audio has made me think of him on a whole new level.

Good account of Eric Liddell's life before and after he became Olympic champion. The vibrant nature of his life and work contrasted at times with petty officialdom. His determination and good humour shine through this account more than 70 years after his premature death. Well worth a listen particularly for anyone wanting to know more about one of the heroes of "Chariots of Fire".

I'd actually never heard of this guy before. so glad I listened to this befitting tribute to a legend.

Would you listen to For the Glory again? Why?

No I don't think I will. I was drawn to the book having read the many glowing reviews upon it's release but I found myself unmoved and frustrated by it. Eric Liddell did not come to life in my minds eye as I listened and I liked him far less than I expected. The author is very reverential to Liddel, he is over positive, too forgiving, does not challenge anything, his only criticisms were aimed at the church Liddel was a missionary for who treated the great athlete at times as a cash cow and did not extract him from a dangerous and volatile situation.I found Liddel rather selfish in his selfishness, born in to a missionary family, sent off to a boarding schoolwhich was run by the church for children of missionaries, he was conditioned and brought up to that way of life. He identified with China as that was were he was born and the only place /time he lived as a family with his parents before being sent back to England for school. Even when he was sent to England were he stayed till the end of his schooldays he considered himself Scottish simply because his parents were Scottish. He seemed to spend his life trying to live up to his hero, his father and in his goodness I started to find him a bit frustrating and dare I say annoying. There is an arrogance in the mindset that the events and fall out that led up to war did not seem to factor in to Liddel's consciousness or if they did this aspect was not explored in the book. So determined were the missionaris to carry out there work that the events in the rest of the world did not seem to factor. This results in the Liddel family complete with his two girls almost getting torpedoed on their way to Canada. For parents to put their children in to such awful danger seems unforgivably reckless and negligent to me. In being determined to carry out his calling to God he spent little time with his family and they underwent hardships, danger and lack of contact with their father because of this. This is held up by the author as a sign if Liddel's ultimate good and selfless character but it made me cross and think less of him.