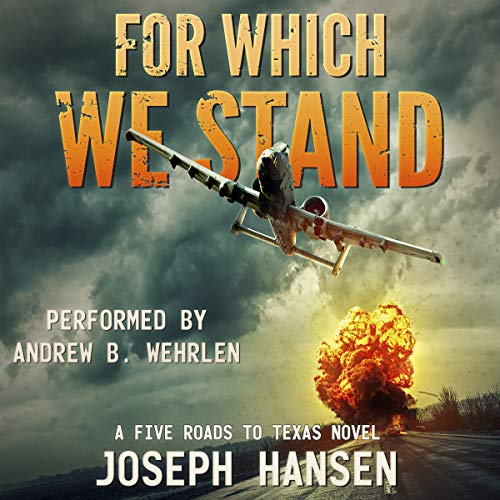 For Which We Stand: Ian's Road (A Five Roads to Texas Novel)

By: Joseph Hansen, Phalanx Press
Narrated by: Andrew B. Wehrlen

El Paso wasn’t the Promised Land that Ian and his crew had hoped for, but it wasn’t a total bust either. The concept of a safe haven in today’s world was a fool’s errand at best. This was the consensus of their tiny band and to keep moving their only salvation. While others waited in their pens, the four from the private security company moved on, taking on as many they could help, in hopes that they too would join the fight. Their journey was long and arduous, but it was worth it...they hope.

El Paso is where the final evidence that this is more than a simple lab experiment gone wrong is. It was too focused, with too many players who knew too much too early in the game, causing assumptions to be made. Assumptions that gained strength with every step they took until the small troop was convinced that this was not just a simple virus of natural origins. America was under attack.

For Which We Stand is a postapocalyptic thriller that lends credence to the fears that many share. Is it possible? No one can say. Five Roads to Texas is but one of hundreds of end-of-the-world scenarios. We all know it’s coming; how and when are the only questions.

What listeners say about For Which We Stand: Ian's Road (A Five Roads to Texas Novel)

So many characters, authors and storylines! amazing!! it's a must read for the genre.

Ians a merc and leads his team fighting the invaders. My kind of story. Best book so far. Hope the coming ones are as good.

A good series for sure .

This series has actual characters that are NOT the dumbest people on earth . So far im enjoying the ride with out wanting to hate on the author (authors) ,

Expected better for this character and team of characters. It was like lazy writing by the writer.

A good sequel to a great book

This book is a continuation to the Five Roads to Texas book. This follows
Ian and his group after leaving El Paso. There are infected and humans to battle which keeps the book interesting. The book was well written and I can not wait until the sequel of this book. I was given this book in exchage for an honest review.

Short, but well worth it.

I enjoyed the collaboration so much I wanted the following books immediately.
Fast pace well written what more could a listener want.

these books are all awesome! full of action and narrator brings it all to life!
I was given this book for a free review which in no way swayed my opinion!

Great continuation of the series but I’m definitely missing some of the other characters.
This one leaves you at a cliffhanger moment.
If you’ve read the others you must read this one as well! Can’t wait for book 4!

Andrew does an amazing job narrating as always!

I was voluntarily provided this review copy at no charge by the author, publisher and or narrator.

I wish it was a little longer

This is a decent addition to the Five Roads to Texas series. The ending leaves you hanging and I hope the next book has more to it.

I was given this review copy audiobook at my request and have voluntarily left this review.

For Which We Stand: Ian's Road

I really enjoyed following Ian and his gang. I can't wait to find out what happens next. No one can do snark like Mr. Wehrlen. I received this audio book for free through Audiobook Boom for my unbiased review.